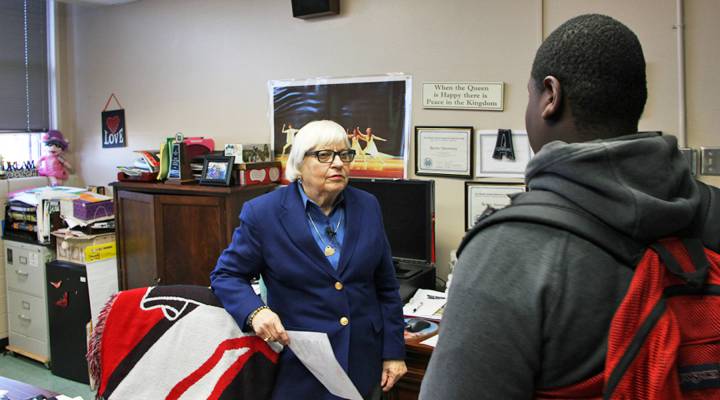 “Have a seat,” Simmons recently said, welcoming a mom and her son into her office. “So what’s going on?” she asked.

“Horrible, I’ve had a horrible week,” replied Yasmin Rodriguez, the mother of a student. She came to ask for help for her son, who has struggled this year and talks back a lot.

“Could you have passing grades? What if I got you a mentor?” Simmons asked him.

This is how Simmons spends a lot of her day. She sees a stream of people.

It’s hard to keep principals at schools where there are a lot of low-income students. But Furr High School tells a different story. Simmons has been on the job about 17 years and now leads the most ambitious endeavor on campus yet.

In 2014, a study from the School Leaders Network found that over a quarter of high-poverty schools lose their principals each year. That turnover can cost millions — up to $36 million just on hiring costs for high-poverty districts nationally.

Simmons came out of retirement to lead Furr in 2000. Back then, gangs brought violence to the school. There was a stabbing and a huge gang fight. Barely half the kids graduated. Simmons thought she’d last three months. Seventeen years later, she’s still here — and the graduation rate is now more than 90 percent.

“I think I’m a little cray cray,” Simmons said. “I mean, I’m determined that these kids are going to have a chance.”

Last fall, her school won $10 million from the XQ Institute, a nonprofit led by Laurene Powell Jobs, Steve Jobs’ widow. Simmons and other school administrators will use the money to make learning more personal and hands-on for kids over the next five years.

“You don’t just need skilled teachers. You need a school leader who is able to provide those supports and also to sort of provide a vision for the school to help them all be on the same page about what we’re trying to do with this program,” Hamilton said.

Even with all her experience, Simmons still questions whether she’s doing enough.

“Did I care enough? Could I have done something differently?” Simmons said. “I don’t want to sound mushy, but I’m just being honest.”

She said that concern keeps her going even in her 80s.

What school principals can learn from CEOs 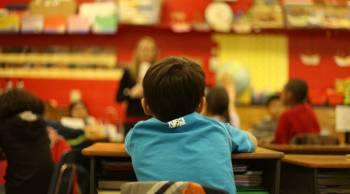