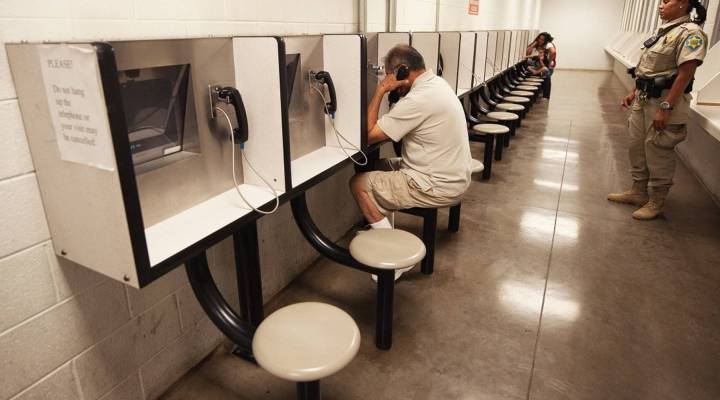 COPY
A detention officer looks on as visitors use video phones to communicate with prisoners at an Arizona jail. PAUL J. RICHARDS/AFP/Getty Images

A detention officer looks on as visitors use video phones to communicate with prisoners at an Arizona jail. PAUL J. RICHARDS/AFP/Getty Images
Listen Now

A recent memo to federal prosecutors from U.S. Attorney General Jeff Sessions changed the policy on prosecuting nonviolent drug crimes. Sessions wrote: “It is a core principle that prosecutors should charge and pursue the most serious, readily provable offense … by definition, the most serious offenses are those that carry the most substantial guidelines sentence, including mandatory minimum sentences.”

In practice, what does this mean? On the face of it, the memo reverses Obama-era directives to pursue lighter sentencing and punishment for nonviolent crimes. Sessions’ policy is at odds with criminal justice reform by both Democrats and Republicans, and critics say the directive to pursue maximum punishment will be costly for the families of nonviolent offenders and for taxpayers.

According to the Vera Institute of Justice, incarceration costs an average of more than $31,000 per inmate, per year, nationwide. In some states, it’s as much as $60,000. Taxpayers foot the bill for feeding, housing and securing people in state and federal penitentiaries.

There’s also the cost to victims and the families of those behind bars — legal fees, phone calls, gas and, in some cases, the loss of income. Proponents of stricter sentencing say that the cost — to taxpayers and family members — is worth it to keep the country safer.

So what does a prison sentence for a nonviolent offense mean for taxpayers? What are the economics of criminal justice reform?

Charis Kubrin, professor of criminology at University of California, Irvine, joined Marketplace Weekend to discuss the economics of prison.

Tune in using the audio player above to hear the full interview. For more of our coverage of how prison affects families of the incarcerated, check out this story.