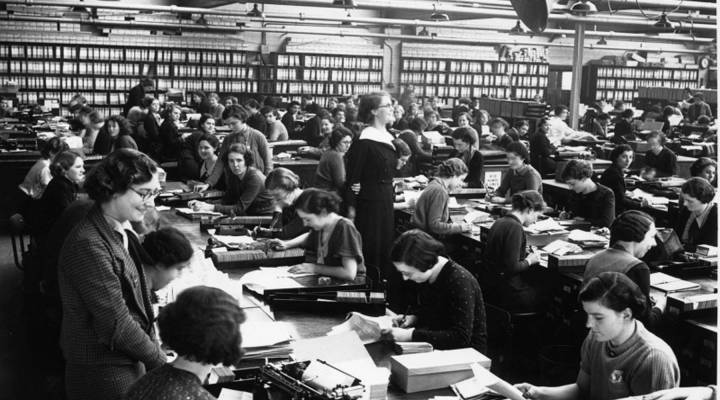 The typical narrative that you can work hard, save and be successful in America is increasingly out of touch with reality. Many families in the U.S. are faced with decreasing job opportunities, stagnating wages and a slow recovery from the recession, and though they save and work long hours, they still worry about being financially unstable.

Jonathan Morduch and Rachel Schneider tracked the finances of hundreds of Americans over a year to see what living in the U.S. is really like. In their new book, “The Financial Diaries: How American Families Cope in a World of Uncertainty,” they show that Americans today are more worried about job insecurity than with not having a job at all. Host Kai Ryssdal talked with the authors about why that is. An edited transcript of their conversation follows.

Kai Ryssdal: The image that you guys use in the book, Rachel, is finances — personal finances in this country are not so much the high-wire act that everybody talks about, but actually it’s just a rocky, rocky, boulder-strewn road.

Rachel Schneider: We do, we do think of it that way. Because, you know, we had this image, and it was really kind of a visual image: You picture this idea of a life over years, right? And it’s this upward arc that we imagine. That you start out going to school, and then you get to your first job, and then maybe you get married, you buy a house, and you over time earn more and more. And occasionally, sometimes maybe something is going to go wrong, push you off that arc, but that if you save, plan, eventually you’ll end up in a better place. And that’s not really what we saw people experience. What we saw people experiencing was much more of an ongoing up and down, and not necessarily with an upward trend. And that leads people to really feel insecure and worried and stressed in a different way than I think we’ve really understood before.

Ryssdal: There’s a couple in the introduction to this book, Jeremy and Becky. He’s an auto mechanic and he’s working overnights, and again it’s a volatile set of paychecks. But he eventually, they eventually choose lower pay in order to get some stability. I mean, people are actually sacrificing to, I guess, Rachel, avoid that boulder strewn road, right?

Schneider: They are. You know, the Pew Charitable Trust asked this survey question in a national survey: They said, “Would you prefer greater stability or moving up the income ladder?” And shockingly, 92 percent of Americans say stability. And so Becky and Jeremy are really acting on that same instinct. And it really gives you this window into how people are thinking about their life, what matters most. And we think in America that what matters most is mobility. Right now what matters most for a lot of people is stability.

Ryssdal: Is that of an artifact of the recession? And how, despite the headline numbers, so many people in this country, Jonathan, never got back to where they wanted to be?

Jonathan Morduch: We don’t think it is. And, of course, no one did this kind of study before the recession so we can’t really compare. But we see this shift happening really since the ’80s. The jobs have changed. Those steady, administrative, clerical, manufacturing or repair jobs that used to be in the middle of the economy and employed so many people and provided solid lives, you know, those jobs have disappeared. And increasingly, our jobs not only pay less but are less secure. And so we see a story that’s really been happening for a long time but that the recession has revealed. And so the big shift now is, when we think about insecurity, it’s not so much about “Will I have a job?” It’s not so much about employment. It’s about insecurity within a job. It’s Jeremy, the truck mechanic, who has a steady job, but he doesn’t have steady hours, he doesn’t have steady pay, and that’s really the key.

Ryssdal: There are broad themes in this book: spending, saving, borrowing, debt. Earning is another one. What, though, Rachel, is the — here comes the hard question — what’s the answer?

Schneider: It is a hard question. You know the big theme, where we landed after doing all of this research and spending a lot of hours trying to process what we thought it meant, was a theme about risk, and the idea that individual families and individual people are bearing the risks of our economy instead of trying to spread those risks out over across institutions. So Jeremy’s story is exactly that. He’s bearing the ups and downs of demand in their employer’s services and really what we need is for larger institutions — employers, financial institutions, governments, municipalities — to take on a bigger share of the risk that families are experiencing.