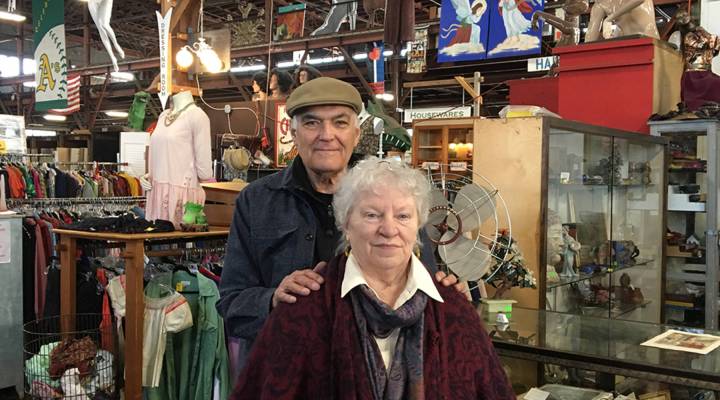 COPY
For 36 years Dan Knapp and Mary Lou Deventer have made money out of other peoples' trash. Sam Harnett

For 36 years Dan Knapp and Mary Lou Deventer have made money out of other peoples' trash. Sam Harnett
Listen Now

Berkeley’s reclaimed trash company Urban Ore has diverted tons of garbage from the dump and into the hands of customers, and the company has become a key part of Berkeley’s recycling ecosystem. But it could disappear.

That’s because the owners of the 36-year-old business, Dan Knapp and Mary Lou Van Deventer, are ready to stop working.

Many of America’s small businesses are in a similar position. Baby boomers hold about 45 percent of the country’s privately owned businesses that employ workers, according to a new analysis of U.S. Census data by the nonprofit Project Equity. As the owners retire, many shut down or sell off their businesses.

“We bought it at $3 million and it’s worth three times that now,” Knapp said. Urban Ore’s owners have a different plan, even though selling off the property could prove lucrative. Urban Ore’s three-acre warehouse in Berkeley is a real estate gold mine.

“Both our lawyer and our banker have advised us to sell the property and take the money,” Van Deventer said. “And we say, ‘But we said we spent our lives building the business.’”

The couple say the employees are the only ones who know how to keep their business running. Max Wechsler, the Ore’s assistant manager, would be excited to take over Iron Ore.

“They’re such valuable resources,” Wechsler said. “So I am standing on the shoulders of giants here.”

“Most people aren’t aware that employee ownership is an option,” Lingane said, adding, “that they have a potential buyer right there under their nose.”

Lingane said she is concerned that when business owners retire, they will take their businesses with them or sell to larger companies. She said that will hurt communities by further concentrating wealth. Project Equity gets a percentage of the sale for helping companies transfer businesses to employees.

“When you’ve been in the business this long, and you’ve seen so much flow past your eyes every single day. You lose your lust to own and possess,” she said.

Urban Ore is in the process of preparing the business to be sold to its 38 employees.