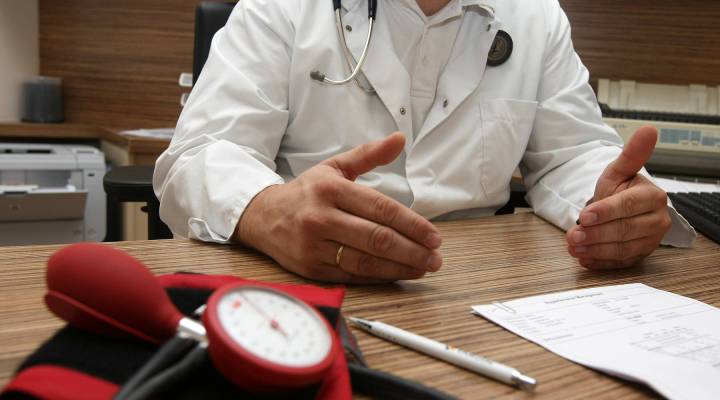 With President Trump in office, the state of Wisconsin is pushing a radical Medicaid proposal. Adam Berry/Getty Images
Listen Now

Paying for health care is an issue that worries many people. In the latest Marketplace-Edison Research Poll, 75 percent of respondents said they were fearful they weren’t going to be able to afford the services they or their family needs.

Yet some state and federal lawmakers want people on Medicaid — the health program primarily for children, people with disabilities and low-income Americans — to be more concerned about health care costs.

There’s a movement, particularly in red states, to increase premiums and cost-sharing for those who are in the program. Oren Cass, with the right-leaning Manhattan Institute, said one problem for many states is that Medicaid spending climbs year after year. One way to slow that, he argues, is making sure people in Medicaid have “skin in the game.”

The theory is, simply, the more your own cash is at risk, the more careful you’ll be with that cash.

Historically, Medicaid copays have been low — a buck or two. Starting under the Obama administration, a few states, like Iowa, Michigan and Indiana, imposed higher copays and monthly premiums on the Medicaid recipients further up the income scale.

But now, with President Trump in office, the state of Wisconsin is pushing a radical proposal.

It would “increase the monthly premiums that people pay as much as $10 more a month,” said Kevin Kane from Citizen Action of Wisconsin. “And if you fail to do that, you can find yourself kicked off the program. But even if you pay all your premiums, there’s a time limit on how long you can be on it. Forty-eight months over your lifetime.”

Now, Wisconsin Gov. Scott Walker is waiting on federal health officials to sign off on his proposal. The question those officials must determine is how the plan would impact people in Wisconsin.

“It’s just another punch in the gut,” said Michele Mick, a 45-year-old who lives outside Milwaukee. After two bouts with breast cancer, Mick suffers from migraines and fatigue that cost her two full-time jobs. Now she’s working part-time as a saleswoman earning about $1,000 a month.

Mick doubts forcing her to pony up more of her own money will improve her physical or financial health.

“For me, it would just be, you know, adding to the credit card in hopes of getting to the point where I’m able to pay things off,” she said.

“It’s stressful when you’re dealing with health issues. And then you throw in financial concerns. I mean, financial issues are stressful.”

Mick gets that conservatives want to make sure people don’t carelessly use Medicaid services.

She said she’s not going on any kind of health care shopping spree. She’s just trying to get herself well enough to get back to work and get off Medicaid.