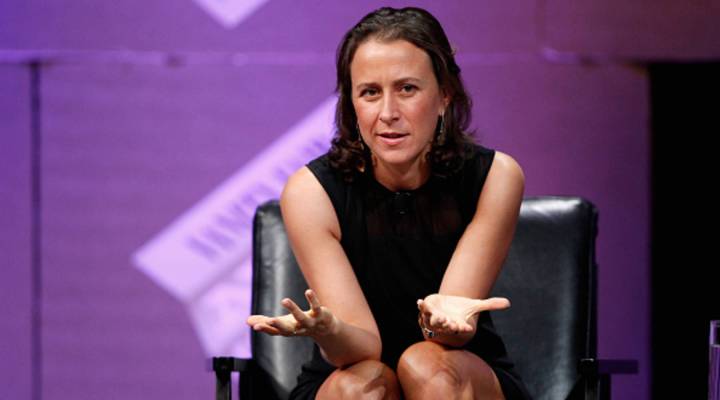 COPY
"In some ways the world is just starting, but in some ways I think we've really driven a lot of change," said 23andMe CEO Anne Wojcicki. Kimberly White/Getty Images for Vanity Fair
Corner Office

"In some ways the world is just starting, but in some ways I think we've really driven a lot of change," said 23andMe CEO Anne Wojcicki. Kimberly White/Getty Images for Vanity Fair
Listen Now

The Food and Drug Administration recently gave its approval to genetics testing company 23andMe to use genetic data in a new way. The company will analyze your DNA and then send you back a report on your ancestry. But whether or not you have a little bit of Neanderthal in your family tree is by far not the only thing your DNA can tell you. With new clearances from the FDA, 23andMe can now look at your genetic makeup and tell you your risk for some pretty widespread diseases — Parkinson’s and Alzheimer’s among them. Kai Ryssdal spoke with 23andMe CEO Anne Wojcicki about the changing business of genetics. The following is an edited transcript of their conversation.

Kai Ryssdal: This FDA approval of these tests for you, it is a business opportunity, right?

Anne Wojcicki: Yeah, I mean, it’s definitely a business opportunity. I think it just sort of amplifies what we’ve already been doing. And I think more importantly, it’s just, it’s a big win for the consumer in being able to take more ownership and more control over their health and get easy access to information that they want.

Ryssdal: And you’re banking on people wanting to know this. I mean, because, while I understand the medical necessity of knowing, it’s a little terrifying.

Wojcicki: Well, I think actually one of things that we found is that, you know, we’re an 11-year-old company now, and so we actually have a lot of experience and a lot of data about what our customers do and do not want, and we’ve seen that this, you know, this is the kind of information people actually really want, because they want to be proactive about their health.

Ryssdal: You know, it’s interesting to hear you say — and this is a little bit sideways — that you’re an 11-year-old company now. It kind of feels like you guys have been around forever even though just even scientifically that hasn’t been possible.

Wojcicki: It definitely has not possible. And it feels like forever in my mind, too. And in some ways, I feel like 11 years is a long time, in other ways I feel like we’re a startup. Because in some ways, with these FDA clearances, we are essentially a startup, because we’re starting over. And I think even seeing the medical community and how — some groups are still controversial about these recent approvals, but some people have really embraced it and said “the era of the consumer is upon us.” So, after 11 years, I am really happy with how much — in some ways the world is just starting, but in some ways I think we’ve really driven a lot of change.

Ryssdal: You say the era of the consumer, specifically in medical science, is upon us. The fact is, though, that you guys have consumers’ data, right? What do you do with it? Where’s the trust factor, and how do you account for this intensely personal thing that is now becoming business’s?

Wojcicki: Well, I think that there’s two core elements of our company. One is that we’re all about the consumer and empowering the consumer with information about them and helping them understand what to do with that information and what are the next steps they could do. And the second aspect is this idea that you’re going to benefit from the human genome. So, we ask customers if they want to consent for research, and over 85 percent of our customers actually do consent. And I think that’s part of what we’re trying to do is encourage people to say one of the most valuable things you have is your data, but it’s really most valuable in a collective sense, if we all come together. And we’re going to be the ones who are really understanding the gene and environment interaction and what you can do to change your behavior, and hopefully also making discoveries in therapeutics and hopefully curing diseases.

Ryssdal: And you need people, you need consumers to buy into that, right? You have to have them have confidence that the data is going to be closely and carefully handled and that it will be aggregated for the good and yet not outing them as it were.

Wojcicki: Correct. The first and foremost decision I make, like if I have to make a decision tree, it’s always the consumers first. We have no business if we can’t protect the privacy of our customers. And let me just say one thing: When individuals come to us, and they have a serious disease, they’re all about, you know, coming up saying, “Just use our data in any way possible, because I have a serious disease and I just want to see that cured.” One thing also, people are always really upset when they find out they participated in the clinical study, and they realize that their sample is just sitting in a freezer and they have a terminal diagnosis. And so, what we’re trying to really do is say, “We’re going to actively use this data to really make discoveries.”

Wojcicki: You know, I haven’t been too closely involved in all of the changes. But I mean, without a doubt it seems like there’s not as much of an interest in regulations these days. But our clearance specifically, I think, was the result of really years of work. And so, without a doubt, we are more and more in this deregulatory environment, but it’s the people on the ground within the FDA who really spent the time, who have been there for years, some of them for decades, who spend the time understanding how this works. It’s that team that is evolving, and it’s not necessarily from above, but it’s really that team that’s put in the effort into understanding what we’re doing and really embracing change.

Ryssdal: As you look at data aggregation as part of your business model, right, which would you have said is the key to everything — more data, right? Is there going to be a tipping point where you’re going to be able to say, “Yes. Now it’s all going to snowball,” as opposed to, what I imagine for you has been a long, hard slog.

Wojcicki: It’s definitely been a long, hard slog. In some ways getting this clearance, I feel like I’m at that point where I see the light at the end of the tunnel. We have over 2 million people. I wouldn’t quite say we’re at that tipping point yet, but I think we’re pretty close in terms of how there’s sort of broad acceptance and the potential of what we can discover with that amount of data.

Ryssdal: Anne Wojcicki is the co-founder and CEO of 23 in me, and thanks very much for your time.