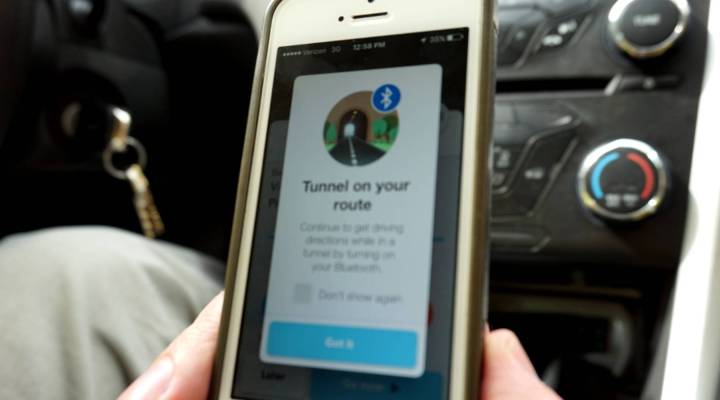 COPY
The Waze app indicates a tunnel is on the route and prompts you to use Bluetooth so the app continues working.   Erika Beras

The Waze app indicates a tunnel is on the route and prompts you to use Bluetooth so the app continues working.   Erika Beras
Listen Now

Rita Green has been driving Pittsburgh roads for decades and still struggles when she’s coming out of one of the city’s two main tunnels.

“It’s very confusing, and you can just see the jockeying of the different cars and people cutting each other off,” she said. “It’s insane.”

That’s because at the end of the tunnels, there are about a dozen options for which way to go and just a few seconds to pick one. Even if you’re using a GPS, it doesn’t matter — just about every system dies in a tunnel. Which compounds that chaos.

“We depend on our phones so much,” Green said.

Well, one driving app won’t die in the tunnels here. In the fall, Waze, a Google-owned company, installed beacons, small battery-powered devices. Through Bluetooth, their GPS keeps working in two of Pittsburgh’s tunnels. The beacons are the brainchild of Gil Disatnik, an engineer at Waze, a crowdsourced driving app. He lost signals driving in a tunnel and set out to solve what he calls tunnel blindness.

It took a couple of years, but he came up with beacons. They’re small, the size of three triple-a batteries. They cost under $30 apiece. Transportation officials attached them to tunnel light fixtures.

“They transmit radio signal, 10 times every second. They allow us to receive that signal and pinpoint our own location inside the tunnel,” Disatnik said. They’re also in tunnels in Israel, Brazil and France.

A back-up Waze beacon in the hand of Pennsylvania Department of Transportation engineer Ben DeVore, who helped install the beacons on light fixtures in two Pittsburgh tunnels.

Even before reliance on GPS, tunnel driving has been difficult for drivers.

“As you go from light to dark, you have a momentary adjustment of the lighting in your eye, the responses of the photo-receptors in your eye,” said Roberta Klatzky, who teaches psychology and human computer interaction at Carnegie Mellon University. “Its like when you go into a dark theater, at first you don’t see anything, then you can see the people all around you in their seats.”

Klatzky said our minds are trying to compute speed and choices — the more there are, the harder it is to choose one. And it’s more confusing when reliance on a faulty GPS enters the picture.

“That may be one reason why people want to slow at the end of a tunnel. They want to give themselves more processing time in this race between the car, the technology and their own brains,” she said.

To show how the beacons work, Ben DeVore, an engineer with Pennsylvania’s Department of Transportation, drove through the Ft. Pitt tunnel using Waze. The app stayed on.

DeVore helped install the beacons. That tiny stretch where drivers exit the tunnel sees between 100 and 300 accidents a month.

“There tends to be more incidents than normal than an average stretch of interstate,” he said.

DeVore thinks the Waze beacons will cut down on accidents. Next fall, when they’ve been in place for a year, he’ll know more. 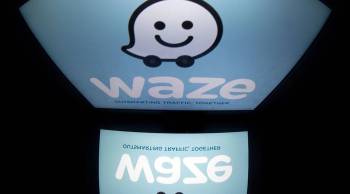