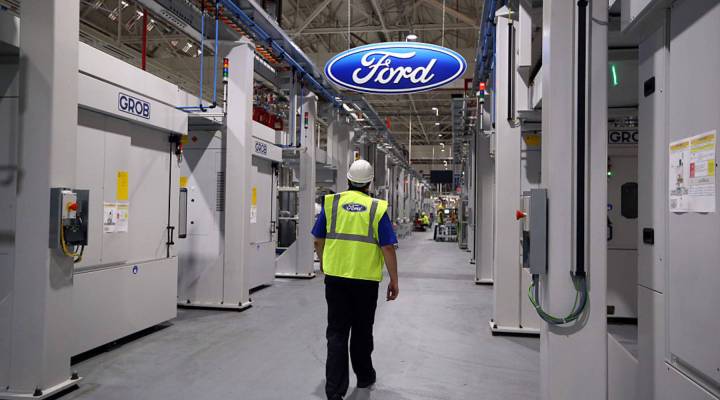 COPY
"We have to make decisions for decades," says Joe Hinrichs, Ford's executive vice president of the Americas. "So we don't get the luxury of making decisions that are four years in nature." Carl Court/Getty Images

"We have to make decisions for decades," says Joe Hinrichs, Ford's executive vice president of the Americas. "So we don't get the luxury of making decisions that are four years in nature." Carl Court/Getty Images
Listen Now

Ford said 130 jobs would be “created or retained” by its move and that just $350 million are new investments. Some of the others investments had been announced as long ago as 2015. Marketplace host Molly Wood talked with Joe Hinrichs, Ford’s executive vice president of the Americas, about what the announcement means. Below is an edited transcript of their conversation.

Molly Wood: Your announcement today says the plan will create or retain 130 jobs there in Michigan. Do you have any sense of how that breakdown looks?

Joe Hinrichs: Yes. All of the actual new jobs are all the Romeo Engine Plant — 130 of them. We say create or retain because we redeploy some efficiencies and other things that happen in a normal basis in our plan. So, there’s 130 incremental jobs created in the Romeo engine plant, but they won’t be hiring 130 direct hires. There will be some, because we’ll redeploy some resources. Another big important part of this investment though, is that without this investment, 3,600 employees in the Michigan assembly plant would be without work and so protecting those 3,600 jobs with this investment is also a big deal.

Wood: And let me ask you though, was there a plan to get rid of those jobs? Like, does this represent a strategy change? Because even in January when you announced that you would be keeping the car factory here and not moving to Mexico, CEO Mark Fields said that that was a move that probably would have happened regardless of the current political administration. So how much of a change in plans does this represent, aside from just a business growth?

Wood: Is it OK that President Trump takes credit for these moves? I mean, it seems to be a little bit of a game back and forth.

Hinrichs: Well, we reached out to the White House a little before 8 a.m. this morning to give them a heads-up on the news we’re making today. We had not had conversations with them prior to that time period.

Wood: And is that common? Was your government affairs team in contact with President Obama too?

Hinrichs: Yes. On a major announcement, we would let all stakeholders know in advance to give them a heads-up. Obviously, it’s good news. We want to share it with everybody from governors to senators and congressmen and congresswomen to the White House. We do that often on big announcements. Yes.

Wood: Obviously, this administration is different in terms of a direct engagement with companies by name on Twitter. That is obviously uncharted territory, but how common is it for the winds of the political administration to direct your business strategy?

Hinrichs: Well, we have to make decisions for decades. So we don’t get the luxury of making decisions that are four years in nature. So our decisions really take into account where we see long-term things going. But we actually are watching very carefully the pro-growth initiatives that the Trump administration is pursuing, especially on tax reform and infrastructure investment and how that could affect the industry both in the medium term and the long term.

Wood: So would you say it affects your PR strategy more than your business strategy?

Hinrichs: Well, we’re certainly adjusting to some changes in what’s going on and the attention of the auto industry and attention on manufacturing jobs. But it suits very well our plan. I mean, we’re the largest producer of vehicles in the United States, and we employ more manufacturing workers than anybody else in the auto industry. So you know, it fits really nicely with our priorities and where our plans have been for quite some time.

Wood: That’s Joe Hinrichs, the Ford president of the Americas. Thank you so much for your time, sir.