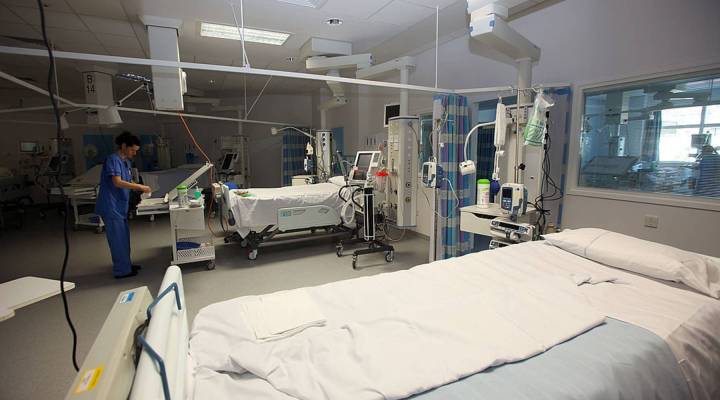 A heavyset man sits on a gurney pushed to the side of a hallway in the emergency room at Jefferson Health in Philadelphia. It’s not even 9 a.m, and already beds are filling up.

CEO Dr. Stephen Klasko guides me to a fancy-looking IV pump. It can replace nearly half of someone’s blood after they got shot, stabbed or hurt in a car accident.

“In the old days, we would lose patients because we weren’t able to get that volume in quickly enough,” he said. “The difference between three minutes or seven minutes could be life and death.”

Klasko is showing me around to make a simple point: It takes money to buy powerful equipment. And the bill to repeal Obamacare being voted on tonight in Congress threatens his revenue stream. Klasko estimates the legislation would move about three percent of his patients from the insured column to uninsured, which could cut annual revenue by $50 million to $100 million.

“There are consequences to these types of policies,” said Rick Pollack, president and CEO of the American Hospital Association.

The AHA launched a media campaign against the bill and brought dozens of hospital leaders to lobby members of Congress. The real danger, Pollack said, is that the hospital would have to absorb the cost of care for the uninsured patients. So as executives have made their case to lawmakers, one message they carry is that hospitals are businesses.

Pollack said if hospitals lose paying patients, they will have to consider drastic steps.

The typical U.S. hospital already has operating margins in the red, said UCLA Law professor Jill Horwitz. We’ve heard about how hospitals may pass any debt from caring for uninsured patients by negotiating higher prices with insurers. But Horwitz said if this legislation passes, hospitals may also look to conduct unnecessary tests and procedures on insured patients as a way to increase revenue.

“It’s important not to say they are rapacious doctors and horrible hospitals, and they are trying to squeeze every last dollar out of you,” she said. “But it would be silly to think that hospitals and doctors don’t respond to those incentives. They have to.”

That’s the kind of move lots of Americans could see as more people enroll in high-deductible insurance plans. Bottom line, Horwitz said, if hospitals take it on the chin, everybody is going to feel it, insured and uninsured alike.