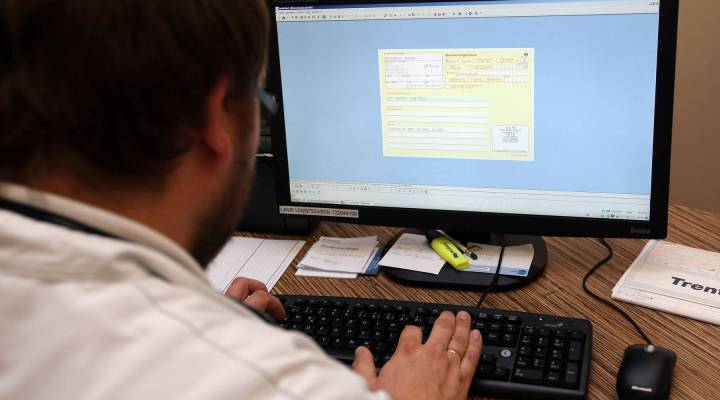 COPY
The digital database system blockchain could offer a more comprehensive and safer approach to how doctors access patient medical records. Above, a doctor prepares a prescription on a computer. Adam Berry/Getty Images

The digital database system blockchain could offer a more comprehensive and safer approach to how doctors access patient medical records. Above, a doctor prepares a prescription on a computer. Adam Berry/Getty Images
Listen Now

It’s 2017, but medical records are still mostly stuck in the dark ages. Most hospitals use electronic health records, but if you want your primary care doctor to share information with your allergist or surgeon, it’s a pain.

The most popular idea right now for connecting medical records — without compromising privacy — is blockchain. The platform used for bitcoin, the digital currency system, could serve health care.

Some of us can remember the old days when doctors thumbed through paper records. These days, they mostly look at records on computers, but the same problems exist: the records from your eye exam, from your blood test — they’re not connected. Even worse, they’re saved on central servers, so they’re easy to hack.

Now, imagine instead, all those pieces of digital paper are encrypted. You need a code to see any single piece. Then the pieces are uploaded into a peer-to-peer computer network. For a doctor who has permission, those digital pieces come together like a puzzle.

Venkatesh Hariharan is CEO of HealthNextGen in Dallas.

“So if I get even one piece of it that’s not good enough, it’s useless,” Hariharan said. “How many places are you going to hack?”

There is a lot of hype around blockchain in health care at the moment.

“Blockchain’s going to be game-changing,” Greg Harris, with NewWave Technologies, said. “I can’t think of a more disruptive technology on the market at present.”

Harris just spent a week at one of the health-tech industry’s largest conferences demonstrating how his company’s product, Patient Wallet, would use blockchain to give patients power over their health records.

“And the idea of using this would be: Maybe I’m in a different country, and I have to go for an emergency visit, and I don’t want to spend four hours filling out paperwork. So all I do is ask the hospital for their identification, and I delegate access to all of my health care records, or all the ones I want to give them.”

This instant access to electronic health records does raise legal questions, especially about sharing data outside the U.S. But it would mean less paperwork and lower administrative costs. That’s why major companies — IBM, Phillips, Merck — all have blockchain initiatives.

Even the U.S. government is interested. Steven Posnack directs the office of standards and technology in the U.S. Department of Health and Human Services. He said the department is holding a co-sponsored “blockchain code-a-thon” event with the Chamber of Digital Commerce.

“We’re inviting teams of people to demonstrate how blockchain can be applied in practice in health care. The variety in different ways it can be used is really exciting to health care stakeholders.”

Posnack said government agencies like the Food and Drug Administration, the Centers for Medicare & Medicaid Services are exploring how the technology could make health care transactions more secure.

Halamka, along with researchers at MIT, ran a six-month test of blockchain in the real world. They entered patient’s medication data — prescriptions, vaccination history, etc. — on separate sites and used blockchain to see if specific doctors could easily access those records. The prototype worked, and they’re planning more pilots with larger networks of hospitals. Halamka said technology isn’t really the challenge.

“We still have the culture where every health care provider thinks of themselves as the single steward of the data that is deposited in that organization,” Halamka said. “With blockchain, every time I make a change to your data, I’m telling the public ledger that the data has changed, and now thinking of it as a communitywide resource is a very different psychology than the past.”

In other words, before health care providers use advanced blockchain technology to stitch together our medical records, we should address some more philosophical questions: Who owns health data in the first place, and who can grant permission to share it?