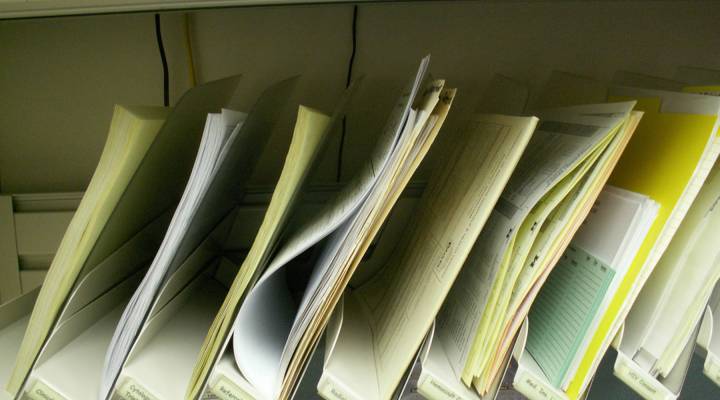 COPY
Medical forms lined up next to each other at a doctor's office.  rosefirerising/Flickr

Medical forms lined up next to each other at a doctor's office.  rosefirerising/Flickr
Listen Now

The Department of Health and Human Services recently clarified just how medical providers are supposed to act when patients want a copy of their medical records. The government has been getting lots of complaints that doctors and hospitals either weren’t turning over the documents or that they were making patients jump through hoops to get the records.

Diana Gordon, a 53 year-old lawyer from Arlington, Virginia, is very familiar with that kind of struggle. She had to stop working six years ago, and is now on disability due to chronic nerve pain. She tries to stretch and move constantly to distract herself from the pain in her neck and jaw. Gordon has been to doctors in several states, but each practice wants to know what has previously been done, so Gordon tries to keep copies of her full medical records for herself so she can copy them as needed. But gathering all those records is an ongoing challenge.

Diana Gordon in her home.

“It’s endless to try and pull them together,” she said. She recruited her husband – another lawyer – to help. But even then, she said “we’d be calling doctors’ offices and trying to get records – getting ‘I don’t know where that file is’ or ‘Can’t get that.’” Eventually, they paid thousands to a patient advocate to help them file the needed requests and get around the red tape.

“It is hard for patients to get these records today,” said Deven McGraw of the Office of Civil Rights at the Department of Health and Human Services “It shouldn’t be.”

There are already rules on the books requiring medical providers to give patients access to their records when requested, but some providers had creative interpretations of the requirement.

“Sometimes people are told HIPAA doesn’t allow me to get access to my record,” explained McGraw, referring to the Health Insurance Portability and Accountability Act, a 1996 law that, among other things, protects patient privacy.

“They’re also charged a lot of money for access,” McGraw said, detailing other complaints. “More than a hundred or in the hundreds of dollars. Access requests are not acted on promptly. People don’t hear back or they’re asked to come in person to pick up the information, and that’s not permissible under our rule.”

Her office has clarified that if you ask for your medical records, you’re supposed to get them within 30 days. And McGraw said you can’t be required to go pick them up if you ask for the documents to be mailed or e-mailed.

“But,” she said, the big difference in the way providers handle this information will come “when the health care providers stop seeing this as a regulatory mandate and start seeing it as this is part of healthcare.”

Doctors’ offices are allowed to charge a “reasonable fee” for gathering and sending the records, but when you’ve been to as many doctors as Gordon, those pages can add up quickly. Her home office has thick folders full of records stacked on desks and lined up on shelves, plus there are more records in the basement.

And patients aren’t the only ones paying.

“It’s a real cost of doing business,” said John Larsen, an OBGYN affiliated with George Washington University. Doctors and hospitals have to hire people to take the requests from patients, retrieve the records, print or copy them, and then put them in the mail. Dr. Larsen used to be president of the Medical Society of DC, and regularly worked with doctors from smaller practices who had to manage filling records requests along with caring for patients.

“They feel a great deal of stress about having to have their limited office staff take on additional unfunded mandates,” he said, “and so they feel the pressure.”

But Larsen is still supportive of patients keeping copies of their medical records. He said the more information people have, the more engaged they can be with their care. Plus, sharing the records is easier than it used to be since electronic medical records are becoming much more common.

“It’s probably going to be a substantial cost,” said Steve Parente, who studies health finance at the University of Minnesota. “But it should be less of a cost than it would have been, say, 10 years ago, now that hospitals and physicians are putting their records out electronically.”

Although providers still mostly send the records to patients via snail mail. Parente said without better technology, the transfer of medical records will continue to be expensive for both providers and patients.

For Diana Gordon, playing with her cocker spaniel despite her chronic pain, just thinking about the document collection adds another layer of dread each time she needs to visit a new doctor.

“It makes it exhausting to think about going to see somebody,” she said. “That causes pain.”

The Department of Health and Human Services is working on more guidelines that are supposed to make the process easier.