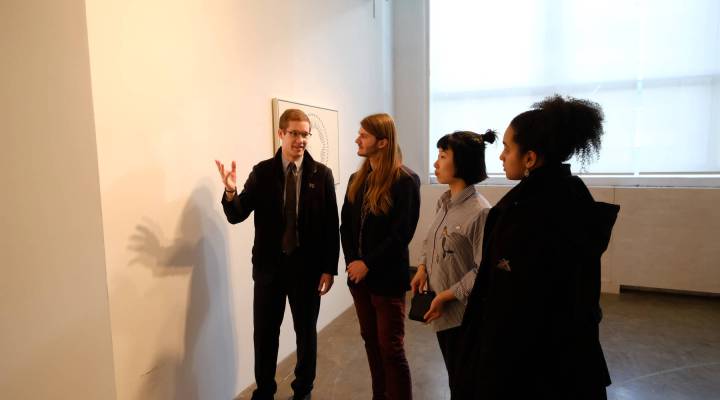 Six undergraduate students from Wake Forest University in Winston-Salem, North Carolina, are in New York City this weekend with $100,000 to spend. They’re on an art-buying trip for the university’s Student Union Collection of Contemporary Art. After spending months researching artists, they are finally visiting galleries and purchasing artwork for the school. Marketplace host Kai Ryssdal talked with one of the students on the trip, Devon Gilbert, about his experience. Below is an edited transcript of their conversation.

Kai Ryssdal: Tell me how this whole thing works, man. Because it’s wild.

Devon Gilbert: So, Wake Forest has since the mid-’60s had an art collection that’s curated entirely by students. So, every four years, the University sends students up to New York with funds from the university to collect contemporary art that represents our time.

Ryssdal: How much money do you have to play with this year?

Ryssdal: OK. So, the university gave a bunch of college kids $100,000 and said go to New York and buy some art.

Gilbert: They made sure we were well prepared to do it.

Ryssdal: So what are the qualifications you’ve got to have? You have to be art history students or what?

Gilbert: You don’t have to be an art history major. There are some course requirements, but it’s actually open to students of any major.

Ryssdal: And you all get to decide this right? There’s no university professors standing there saying, “Oh, I don’t know about that one.”

Gilbert: We have a faculty adviser, but she’s here mainly as a facilitator. It’s our decision in the end. We’ve looked at around 120 different artists, and we cut it down to around 22 to look at when we came to the city.

Ryssdal: So what’s your favorite? What’s going in the door? What do you want to bring home?

Gilbert: I think one of the most interesting things I’ve seen is work from an artist named Faig Ahmed. He’s from Azerbaijan and does textile-based pieces sort of based on motifs from traditional Azerbaijani carpets but with very contemporary elements, such as pixilation or distorted patterns. But we have to decide unanimously what we want to purchase.

Since the mid 60s, Wake Forest has had an art collection curated entirely by students.

Gilbert: Yeah. So tonight and tomorrow night, it’s going to be about deliberating and us deciding what we want to bring home.

Gilbert: We’ll go back to the gallery. There is some room for negotiating price and shipping and framing and things of that nature. But yeah, it’ll be shipped back from New York to the university by an art shipper, and we should have it within a couple of months.

Ryssdal: Once you found out about this program, how long did it take you to decide, “Yeah, I want to be a part of that”?

Gilbert: I heard about the program while I was still in high school. It actually was one of the things about Wake Forest that interested me. So it’s been a goal of mine for the last four years.

Ryssdal: And you graduate in the spring, right?

Ryssdal: And then what?

Gilbert: Then I’m looking for jobs in the art world in sort of the business of art up here in New York.

Ryssdal: So this is good, this weekend, a little networking right now. Good deal.

Ryssdal: Devon Gilbert he is a senior at Wake Forest University he’s majoring in business and enterprise management and art history. He and a bunch of his friends are on an art buying trip in New York City this weekend. Devon, thanks very much.