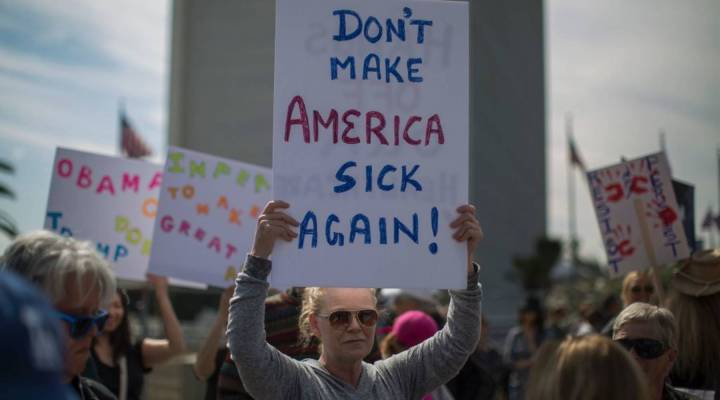 Top Republicans – including President Donald Trump – have been huddling today to discuss ways to repeal and replace Obamacare. No doubt one item is on the agenda — shrinking Medicaid, the health program that serves 70 million Americans, people with disabilities, the elderly and those with low incomes.

In his address last night, Trump said Congress should give states the resources and flexibility they need with Medicaid “to make sure no one is left out.” But the plan emerging from the House would slash federal funding.

The politics here get kind of crazy because more than half of the program’s $550 billion budget comes from Washington. States cover the rest. That’s a lot of cash for states to lose.

So Republicans in Washington may make life pretty uncomfortable for Republicans in state capitols. Deep Medicaid cuts could make it hard to balance the budget and be a drag on local economies if billions in federal funding dries up.

Under Obamacare, 31 states expanded their Medicaid programs ultimately to 11 million people. And because Washington has picked up nearly all the costs, it’s been like a tidal wave of money crashed onto states’ shores.

“We’re very fortunate to have $2.5 billion coming into a state like Kentucky,” said Dr. Eric Loy, who runs health centers in rural Kentucky that serve many patients on Medicaid.

Loy said you can think of the money as an economic stimulus package.

A recent major Kaiser Family Foundation review found that Medicaid expansion has been good economically for about half the states that chose to expand. University of Michigan economist Helen Levy said when 600,000 more people got insurance in her state, good things started happening.

People “now have Medicaid, so the clinic is getting paid more,” Levy said. “But also the sandwich shop next door to the clinic is selling more sandwiches because the clinic is doing more business. That translates into about 30,000 additional jobs in the state of Michigan every year.”

All this helps explain why some governors — in blue and red states — have balked at the emerging House GOP plan that significantly scales back expansion. It doesn’t kill funding completely, but that huge wave of cash sure shrinks.

Lanhee Chen with the Hoover Institution at Stanford said the plan puts the entire $550 billion Medicaid program, expansion and all, on a diet.

“The goal here is to cap federal contribution over time,” he said.

Republicans have long believed Medicaid costs too much. And it’s true, the program grows faster than the national economy, and it’s always one of the most expensive line items for states. The thinking, said Chen, is that belt tightening will help states do more with less.

“For states, sometimes when they have this fiscal pressure, it allows them to streamline the program, it allows them make their program more responsive. But I don’t think anyone should make the claim that it’s going to be easy for states,” Chen said.

Certainly states are going to have to make some hard choices, and they all involve cutting. Cutting the number of people on the rolls. Cutting the services provided. Cutting how much they pay doctors and hospitals. It’s not a pretty picture.

“Where do the mentally ill go? Where do the drug-addicted go?” he asked. “The Republicans can do what they want. But at the end of the day, I’m going to stand up for the people that wouldn’t have the coverage if they don’t get this thing right.”

The point to keep in mind is that the proposal coming from the House is just a proposal. To governors like Kasich, it is less a plan than the starting point for negotiations with high stakes.