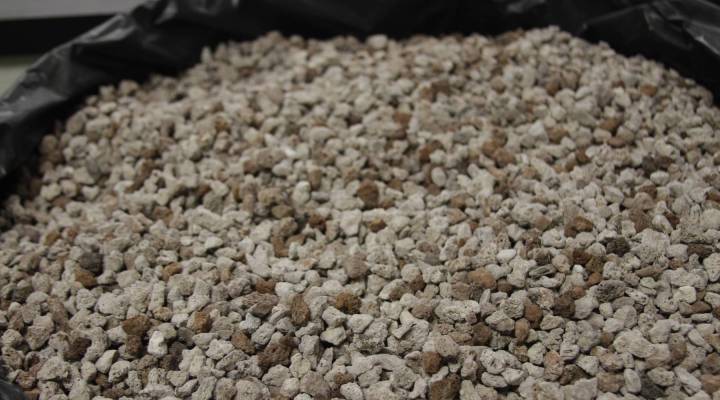 COPY
The limestone rocks pictured here were created from carbon dioxide. The raw material costs a few dollars per ton but sells for $70 to $100 a ton once it’s been manufactured. Jed Kim/Marketplace

The limestone rocks pictured here were created from carbon dioxide. The raw material costs a few dollars per ton but sells for $70 to $100 a ton once it’s been manufactured. Jed Kim/Marketplace
Listen Now

For the most part, fighting against climate change means keeping as much carbon out of the air as possible, whether that means generating energy from solar and wind sources or capturing the carbon that comes out of less-clean sources. Strategies for captured carbon include liquefying it and storing it underground. Some companies, though, are turning that waste carbon into a revenue source.

At its facilities in Los Gatos, California, the company Blue Planet takes the carbon dioxide that factories collect, runs it through tiny nanotubes in their machines and converts it into carbonate. The limestone rock that results will be used as a necessary component of concrete.

Brent Constantz, CEO of Blue Planet, examines aggregate limestone his company has created from waste carbon dioxide. The material will be incorporated into cement.

“We’re making a real basic material out of the carbon dioxide, and that prevents it from going into the atmosphere and contributing to climate change,” said Brent Constantz, CEO of Blue Planet.

One major benefit of using carbon dioxide in this way is that it traps the carbon in buildings, bridges and sidewalks, removing it from the carbon cycle.

“Every yard of concrete that we make, you know it’s about half a ton of CO2 sequestered per yard,” Constantz said.

“Material comes in for a couple of dollars a ton, and then we coat it, and then it actually goes out for between $70 and $100 a ton,” Constantz said.

Blue Planet is developing units that factories and power plants can use to turn their carbon into a money stream of rocks they can sell to concrete makers. So far, Constantz said his company has contracts in California, Canada and Mexico.

Another company, Opus 12, is also hoping to build a business out of carbon dioxide. The young tech startup is part of an accelerator program housed at the Lawrence Berkeley National Laboratory. It is developing a machine that takes carbon dioxide, passes it through membranes coated with catalysts and generates chemicals like carbon monoxide, acetone and methane.

“Essentially, exactly what a plant does,” said Kendra Kuhl, a co-founder and chief technical officer for Opus 12. “You take carbon dioxide in a plant, and you make sugars. Instead of sugar, we’re making a range of different compounds.”

Kuhl said the compounds that their device can create are useful in manufacturing and pharmaceutical making and can provide a money-saving alternative for companies that would otherwise have to buy them.

“It actually ends up being — depending on the market volume — fairly high value,” Kuhl said. “So we can make a large profit margin.”

What Opus 12 and Blue Planet are doing is shifting carbon from waste into commodity. If this kind of push succeeds, it could even drive carbon harvesting. Rather than simply reducing how much carbon goes into the sky, industry could begin pulling out what’s already there.

Noah Deich is the executive director of the Center for Carbon Removal, which works to grow the entire field of carbon capture. He said technological solutions are still in early stages.

A prototype of a machine being developed by Opus 12 generates carbon monoxide and other chemicals from waste carbon dioxide. The products are useful in manufacturing.

“It’s stuck in a chicken-and-egg situation today, where there aren’t markets to support it, and so there hasn’t been a lot of industry investment,” Deich said. “As a result, there aren’t a lot of technologies that you can go point to and say, ‘Hey, we should do a lot more of that.’”

Deich said he sees potential for growth if governments incentivize carbon innovation like they did with solar and wind technology. He’s concerned, however, that that kind of push might not happen under the Trump administration.

“We’re not really sure what the new administration thinks about climate change,” Deich said. “We’ve heard a lot of mixed messages, but none of them seem particularly encouraging when it comes to climate action.”

He said he’s already seen indication of a lull in development as investors wait to see what environmental rules will still apply.

“Things seem to be, in many cases, paused until there is greater certainty about what the regulatory frameworks will be, so that they can accurately assess what the risks and opportunities are for various investments,” he said.