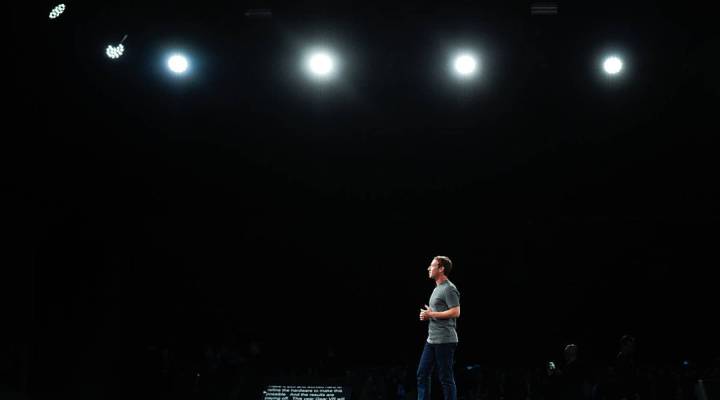 COPY
Founder and CEO of Facebook Mark Zuckerber gives his speach during the presentation of the new Samsung Galaxy S7 and Samsung Galaxy S7 edge on February 21, 2016 in Barcelona, Spain.  David Ramos/Getty Images

Facebook founder and CEO Mark Zuckerberg shared some deep thoughts this week in a long essay about where he sees humanity going online. Marketplace host Kai Ryssdal spoke with senior tech correspondent Molly Wood about what the nearly 5,000-word treatise had to say. Below is an edited transcript of their conversation.

Kai Ryssdal: So here it is, 5,700-something words from Mark Zuckerberg. Yes, 1.9 billion people use Facebook, but it seemed to me there was no “there there” in this thing. There was no action coming out of this.

Molly Wood: You know, it sort of remains to be seen what action will eventually come. It’s definitely more of a manifesto, I think, about “why.” Ultimately, it is an argument for why Facebook should be the place that everyone conducts all of their community, all of their interaction. It was weirdly, despite its lack of action, an argument for total global dominance by Facebook.

Wood: I did not find it particularly soothing. I think that the idea of communities online are really powerful. They have also been around since the ’80s, or just a few years later. And so the argument that all of this has to take place on Facebook at the enrichment, ultimately, of Mark Zuckerberg and the sacrifice of our data, is I think, something we should take very seriously. We can accomplish on the open web, where you don’t have to be a member and turn over all your personal information, almost all of the things that he suggested in that post. And frankly, without the oversight and — there’s no other way to put it — censorship that also happens on Facebook.

Ryssdal: This idea of path dependency now, we’re already down the Facebook path, and it’s gonna be tough to break us out of that.

Wood: We are. I think it is exactly Facebook’s size and reach that made it such a platform for fake news and viral misinformation during the election and before. And the monetary structures that reward this fast propagation of information. So the idea that we would centralize all of our communities and all of our communications on one platform that is ultimately for-profit? That’s not something that many technology proponents, including myself, are going to argue for.