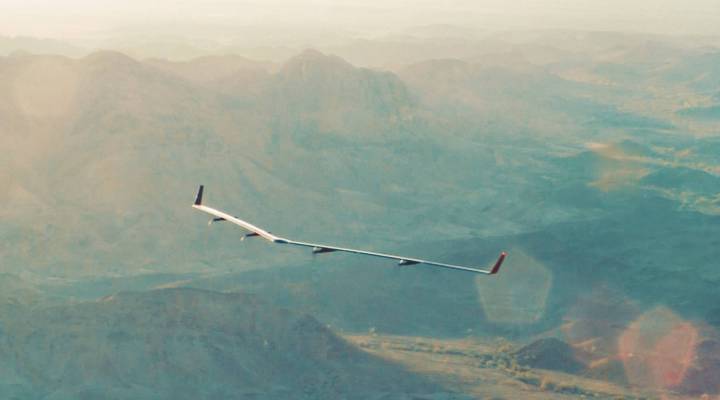 Facebook announced that it has completed its first-ever test flight of Aquila, an autonomous, solar-powered aircraft that it hopes will eventually beam internet access to developing countries that can’t get it by more traditional means. We brought on senior tech correspondent Molly Wood to make us smart about it.

So they built this thing out of this cured carbon fiber, they say it’s stronger than steel. The wingspan is as wide as a 747, it weighs as much as a car, it’s shaped like this really big boomerang, and it flies in the stratosphere at 60,000 to 90,000 feet.  And they plan to daisy-chain these things together so one plane is talking to a hub on the ground in a city, and then several other planes fan out behind and they’re all connected.

How the planes talk to each other:

The idea is that if they’re connected with these lasers they can cover more ground, and because each plane can cover 60 square miles down on the ground, a whole network of planes could really potentially beam internet to a lot of different areas. Now they haven’t even started testing the laser stuff, or even the communication stuff, they’ve only flown the plane so far for about 96 minutes.

Facebook is pouring money into R&D, research and development. That amount has increased steadily for the last three years, it’s now about 13 1/2 % of its overall budget, and that was in one quarter alone (in 2015) a billion dollars. And Facebook really sees this thing as a really clear extension of its mission. It is reminiscent of Google’s moonshot, Project X stuff, but in Facebook’s case, it’s really focused on internet access. The assumption for them is that the more people they can connect, get online, the more people that can potentially become Facebook users.