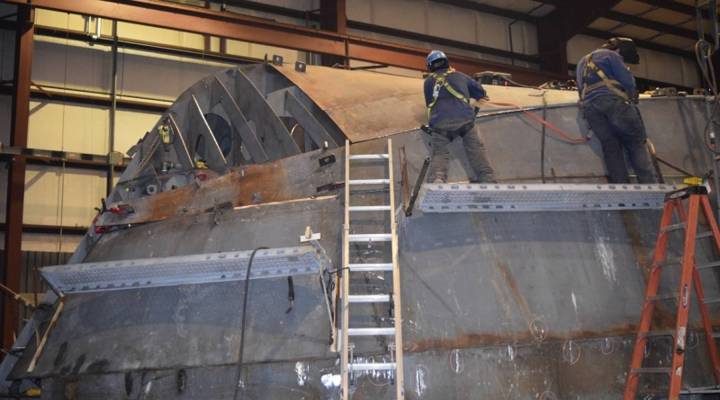 It’s the end of the workday at Great Lakes Towing, a company that proudly points to its 118-year history and founder John D. Rockefeller. Three men secured in harnesses weld on the bow of a new tugboat they’re building, a boat that will assist ships in emergencies and break ice in the Cleveland Harbor.

“This tug will be named the tug Cleveland,” said Great Lakes Towing President Joe Starck. “All the older tugs are named after states, so we decided we’ll name these after our ports.”

The company has tugboats stationed from Duluth, Minnesota all the way to Buffalo, New York, helping clients reach 40 different ports across the Great Lakes. But when the shipping season ends, there’s little use for tugs, and Starck said the company changes gears.

“Shipyard work is what balances our annual cycle so that we don’t go completely dark here,” Starck explained. “In the old days, they would shut down and everybody would go to Florida. That doesn’t happen anymore.”

Shipping on the Great Lakes comes to a halt this time of year when the lakes freeze over, the locks at Sault Ste. Marie shut down and crews on big freighters go home to their families. But companies like Great Lakes Towing have found ways to keep busy over the 10-week break as a way to combat an overall downturn in business.

Great Lakes Towing hires anywhere from 50 to 100 extra employees for the winter to help with repair work. The shipping industry started to see a decline in 2009, due to the recession. It has affected towing too, so Starck said the company had to diversify, and it hasn’t been easy.

“It has been a struggle,” Starck said. “You really have to constantly keep your nose to the grindstone.”

According to the Lake Carriers Association, shipping in the region fell 4.5 percent last year compared to 2015, and almost 8 percent below the five-year average. Because of its changed business model, Great Lakes Towing is surviving and expanding, with a fleet of new tugboats in addition to repairing clients’ ships.

Joe Starck, president of the Great Lakes Towing Co., says the number of employees can double during winter ship repair.

Starck said the number of employees can actually double during winter ship repair. That’s a little different than what happens to all the ship captains, engineers and deckhands on board ships sailing the Great Lakes.

“Basically everyone gets laid off. And then it’s up to them on what they want to do,” said John Clemons, regional vice president of the American Maritime Officers Union. It has about 400 members. Clemons works in a shipyard during the winter break, but enjoys his monthlong vacations that are part of the 300-day shipping season.

“I’m just happy to be home sitting on my couch, watching my TV,” Clemons said. “Tinkering away at my house, a break from being around the same 20 guys for 60 days.”

Some shipping companies offer programs to keep employees busy during the break.

During the regular season, the Interlake Steamship Co. employs some 200 people to work aboard its nine ships, hauling coal, iron ore and limestone across the Great Lakes. But over the winter hiatus, the company’s Brendan O’Connor said he’ll sometimes hire 20 or more employees to work on ship repair.

No matter how they spend the winter break, shipping companies, engineers and deck officers are all looking for a better season in 2017. They hope President Donald Trump’s promise to rebuild the nation’s roads, bridges and waterways will provide more job opportunities in the Great Lakes.

“Any project that requires more steel and more building materials will help our business,” Starck said.