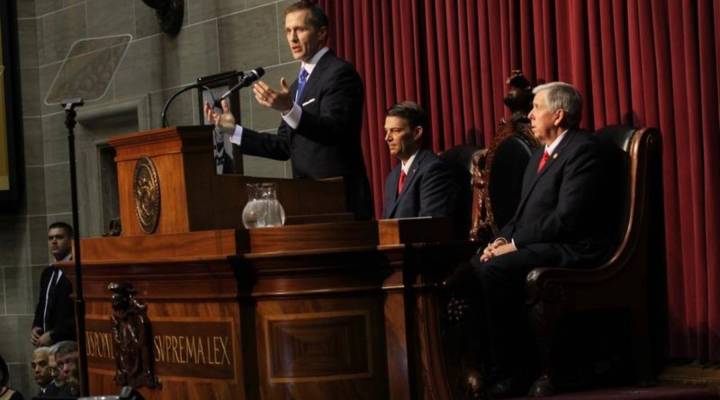 COPY
Missouri Gov. Eric Greitens makes his State of the State speech on Jan. 17. Greitens supports a right-to-work measure, which would bar unions and employers from requiring workers to pay dues. Jason Rosenbaum

Missouri is a latecomer to “right to work,” since nearly 30 other states have adopted the policy. But that’s likely to change.

The solidly GOP-controlled legislature is expected to pass the longstanding priority of businesses and business groups soon. And, the measure has the support of Republican Gov. Eric Greitens.

“I approach this as somebody who started my own business and worked with veterans, helped them come home and successfully start their own businesses,” said Greitens, a political newcomer who was sworn into office in early January. “We have to sign right to work. Missouri has to become a right-to-work state.”

Before we go any further, let’s get a little linguistic housekeeping out of the way. Right to work bars unions and employers from requiring workers to pay dues as a condition of employment. Unions charge different amounts for dues, but it’s generally a few hundred dollars a year or more.

Sociology professor Jake Rosenfeld, of Washington University in St. Louis, is an expert on labor unions and said in right-to-work states, unions have to spend a lot more time convincing their members to pay dues. And that prevents organized labor from doing other things — like supporting unionization efforts or engaging in political activity.

“This has become a highly charged symbolic issue that union opponents and union proponents have invested a lot of time and resources into,” Rosenfeld said. “It’s oftentimes kind of a lagging indicator of already weakened union power. And that’s certainly what we see here in the state of Missouri and certainly what we see in other states that have passed these types of laws recently,” he said.

“This simple change has proven in state after state to bring more jobs and spur a state’s economy,” said state Rep. Holly Rehder, who sponsored the right-to-work measure in Missouri.

Union leaders have a choice: They try to fight right to work as hard as they can or they adapt to a new reality.

Some of Missouri’s largest labor unions are working to get a measure banning right to work on the 2018 ballot. Wes Epperson, a retired Teamster who lives in Independence, Missouri, appeared at a recent hearing at the state capitol.

But there’s no guarantee that a ballot initiative would get enough signatures or find favor at the ballot box — especially since the percentage of union workers in Missouri has dropped in recent years. According to the Bureau of Labor Statistics, 11.5 percent of Missouri’s workforce belonged to a union in 2005. That number dropped to 8.8 percent in 2015, which amounts to about a 60,000-person reduction.

That’s prompting some union stalwarts to look in another direction. Clint Zweifel, a former Missouri state treasurer and state representative, worked for the Teamsters before entering elective politics. He said right to work challenges unions to prove to members that they still matter.

“Organizations are going to constantly have to remake themselves,” Zweifel said. “If right to work passes, for instance, you would assume that unions are going to have to remake their own organizations internally, too, in terms of how they serve members and how they conduct business. And obviously, it puts more pressure on them. I think it’s bad policy overall in the state to move that forward.

“But at the same time … the best emphasis at this point is going to be on how do you become relevant to create an economy long term that’s good for all families in the state,” he added.