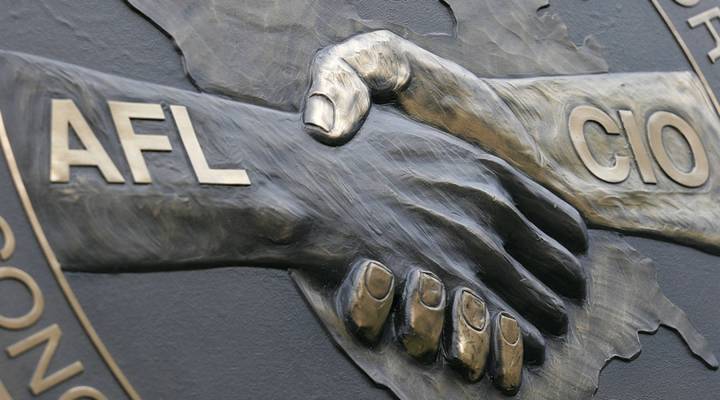 COPY
The AFL-CIO signage on the building at the intersection of 16th Street NW and Eye Street, just two blocks north of the White House, is 2005 in Washington, D.C. Chip Somodevilla/Getty Images

The AFL-CIO signage on the building at the intersection of 16th Street NW and Eye Street, just two blocks north of the White House, is 2005 in Washington, D.C. Chip Somodevilla/Getty Images
Listen Now

Voters in Missouri will decide Tuesday whether to pass a “right-to-work” law. If approved, Missouri would join Michigan, West Virginia, Wisconsin and more than 20 other states in banning private-sector unions from charging dues to members.

Unions, who oppose right-to-work laws, say without the ability to collect union dues, they’ll have less power to bargain for higher wages for their workers. That in turn will hurt workers of all stripes, since nonunion employers typically raise wages to compete with union shops.

Right-to-work supporters say the law would help the state entice more businesses to come to Missouri.

Both sides have poured millions of dollars into the campaign, but union support has been particularly strong. Branding its campaign “We Are Missouri,” the anti-right-to-work group has taken about about $15.2 million from unions nationwide. The Wall Street Journal reports the group has raised about five times more than its opponents.