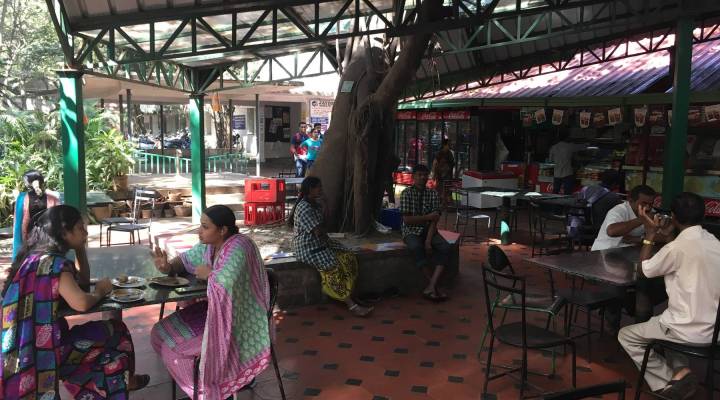 COPY
The outdoor cafeteria at the Indian Institute of Science in Bangalore, India. Sally Herships/Marketplace

The outdoor cafeteria at the Indian Institute of Science in Bangalore, India. Sally Herships/Marketplace
Listen Now

When you think about the kind of  foreign student who is drawn to the United States, Murli Gopalah Krishna is exactly the kind of guy you might be imagining. He’s 31, Indian, and completing a post doc in India in materials engineering. When it comes to working or studying in the United States, Krishna said he would be on board.

“If I get an opportunity, definitely I will go there, I will learn the new things,” he said. “I will do good things. Then I will come back.”

In the meantime, Krishna studies at the Indian Institute of Science in Bangalore. It’s kind of like an Indian MIT. The school canteen, or cafeteria, looks a lot like a school in the U.S. There are familiar school cafeteria chairs, made of metal, that scrape the floor. Students in backpacks check their phones.

According to the Commerce Department, last year foreign students contributed $35.5 billion to the U.S. economy. But President Donald Trump has called for stricter regulations on immigration. There also has been a wave of anti-immigrant sentiment. One new bill, the Protect and Grow American Jobs Act, calls for raising the minimum wage of the coveted H-1B – one of the visas foreigners need to work in the U.S. After China, India is the No. 2 exporter of students to the U.S. But soon it could become harder for new foreign grads to get a job in the states. Does that diminish their enthusiasm for studying in the United States?

A confident 28-year-old, Geeta Deka works in the Bio Physics Department at the Indian Institute. She said she’s happy where she is.

“It’s not the place we want to go, it’s the work we want to do,” she said. “Wherever I feel the project is interesting I’d like to go.”

Deka said she’s more worried about her co-workers in the lab than about Trump. But, she admits, if visa laws are tightened, that would mean problems. And not just for foreign students.

Twenty-five-year old Kusar Raza, a Ph.D. candidate in chemistry, said he followed the election on Facebook and said he sees the United States as becoming anti-immigrant.

The students in the cafeteria here say American schools are good and so is getting paid in dollars instead of rupees. But these are STEM students – science, technology, engineering and math. They know the industries they work in are booming and that there is demand for their skills in the United States. After they leave school, STEM students get three years to find an employer to give them a job and a visa in the U.S. Other students, like 27-year-old Niharika Swaroop, typically get one.

“Basically back in India, if I talk to my friends, everyone is telling me, ‘Man, you are screwed,’ ” she said.

Swaroop, who’s pursuing a master’s degree at George Washington University Law School, said if she had known the outcome of the election, she would have stayed in India.

“It would have made absolute sense. Because I was working in India. I was working there for three years,” she said. Swaroop worries that after she graduates in May, getting a job in law might be impossible. So she’s frantic, rushing to try to figure out how to stay in the United States.

But 8,000 miles away, sitting in a metal chair in the school cafeteria, Kusar Raza said he’d like to try to come to the U.S. Maybe, he said, all the people there don’t hold the same views as the president they elected.