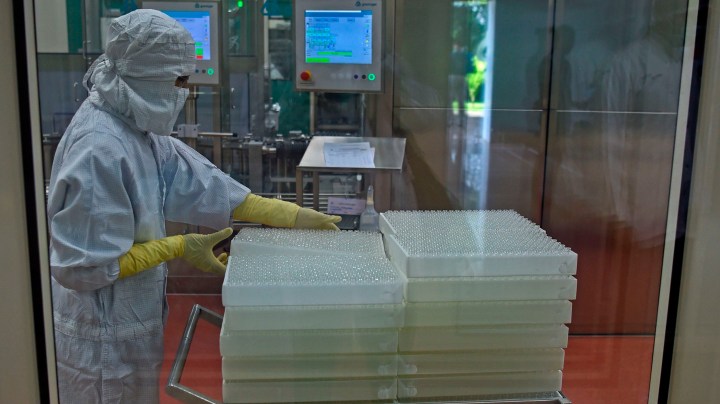 COPY
The CEO of the Serum Institute of India said at a panel last Thursday that American raw materials are running out. Pictured: A Serum Institute employee works on an assembly line for the AstraZeneca vaccine. Punit Paranjpe/AFP via Getty Images
Fast-Track Vaccines

The CEO of the Serum Institute of India said at a panel last Thursday that American raw materials are running out. Pictured: A Serum Institute employee works on an assembly line for the AstraZeneca vaccine. Punit Paranjpe/AFP via Getty Images
Listen Now

COVID-19 vaccine manufacturers around the world are meeting today to discuss a looming supply chain problem: not enough raw materials and supplies to go around.

And among the countries accused of hoarding these items? The United States.

To speed up vaccine production, the Biden administration has invoked the Defense Production Act. The law, which dates back to World War II, lets government cut to the front of the customer line for critical items made by U.S. companies.

“This essentially enables the U.S. government to tell a supplier to ship the goods, in this case, to Johnson & Johnson,” said Simon Evenett, trade economist at the University of St. Gallen in Switzerland. “And those supplies, which were potentially destined to another customer, are of course then diverted.”

Unhappy customers bumped back in the queue include international vaccine makers, effectively blocking exports. The Serum Institute of India, the world’s largest vaccine producer, has contracts to produce the AstraZeneca and Novavax vaccines. CEO Adar Poonawalla said at a panel last Thursday that American raw materials are running out.

“There are a lot of bags and filters and critical items that manufacturers need,” Poonawalla said at the event, sponsored by the World Bank. “Now I’ll give you an example: the Novavax vaccine needs these items from the U.S.”

These items are being blocked from export due to Biden administration policy, he said. Marketplace asked the White House for comment, but did not hear back before deadline.

As the whole world ramps up vaccine production, key ingredients could run out.

“Unless production of what’s called the filling stage, as well as the syringes — unless this all scales up, too, there’s a potential for a problem,” Evenett said.

It’s true that the components in short supply are inexpensive, sometimes low-tech items. But until now, there’s been no business case to build more factories to crank them out.

“There’s no market and there’s no margin that will allow capacity to be built up over time,” said Krishna Udayakumar, associate director of the Duke Global Health Institute. “So we really have to invest in building that capacity.”

The looming vaccine material shortage presents the same dynamic as personal protective equipment and ventilator scarcity at the start of the pandemic: a surge in world demand, not enough to go around and countries wanting to keep supplies at home.

“That certainly is not just for the U.S.,” Udayakumar said. “That’s several times what the U.S. could use. So our ability to ramp up production will allow many other countries to also access those vaccines.”

Still, he said until vaccines are shared around the world, global trade and travel won’t be able to open up.