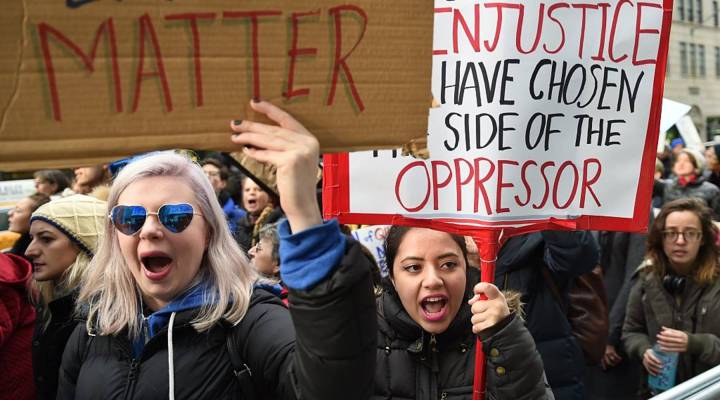 COPY
Woman rally as part of a nationwide protest against President-elect Donald Trump outside of Trump Tower back in December. TIMOTHY A. CLARY/AFP/Getty Images

Woman rally as part of a nationwide protest against President-elect Donald Trump outside of Trump Tower back in December. TIMOTHY A. CLARY/AFP/Getty Images
Listen Now

President-elect Trump’s inauguration is expected to attract the biggest mass protest of an elected president since Richard Nixon in 1973, when 60,000 protesters descended on Washington.

The idea for the Women’s March on Washington was conceived on Facebook and pulled together in a few short months, a feat that would have been impossible even a decade ago.

March organizers are predicting as many as 200,000 attendees. People like Sara Archambault, from Providence, Rhode Island.

Archambault said when she first heard about the march she had a few questions, but quickly realized that it was something that she had to participate in.

“I felt this kind of passion inside me that, if something was going to happen, and it was going to be big, and they needed numbers, I wanted to be in those numbers,” Archambault said.

Archambault found a cheap plane ticket for a $100 round trip. A deal which she quickly sent around to her friends.

“I shot out a text to this network of women and I would say in a matter of hours, that fare was gone and by the end of the day, you couldn’t fly out.”

The Women’s March also stands out as perhaps the biggest ride-share to date, with some 50,000 protesters booking bus travel through an app called “Rally.”

“We don’t own any buses,” he quipped, “just like the ride sharing companies don’t own any cars. What we do is help people get together.”

Except getting together on this scale takes immense amounts of money, logistical coordination, marketing and digital expertise. The likes of which was previously only available to big companies — not first-time volunteers.

“This is new to a lot of people,” Ceci Hall noted.

Hall is on the support team organizing some 275 sister marches across all 50 states. One huge innovation she points to is Slack. An online chat platform that allowed organizers to communicate in real time, without having to plow through a bunch of emails.

Hall noted that fundraising is also easier now, with donate-now buttons through companies like Eventbrite, that interface seamlessly with social media. For getting the word out, however, she said there’s still no substitute for good ol’-fashioned PR.