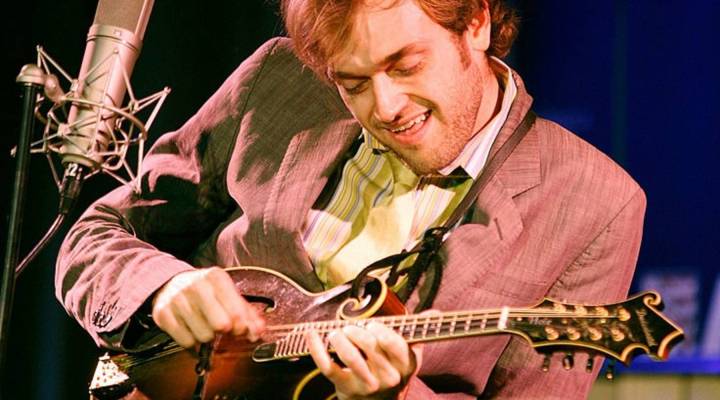 COPY
Chris Thile fell in love with the mandolin when he was just two years old. Matt Carr/Getty Images
The Marketplace Quiz

Chris Thile fell in love with the mandolin when he was just two years old. Matt Carr/Getty Images
Listen Now

No matter who you are, you’ve probably had a rough day at the office that changed your perspective, or maybe you made an impulse purchase you really, really wish you could take back. This week, Chris Thile, the host of “A Prairie Home Companion,” took our money-inspired personality questionnaire.

You can catch “A Prairie Home Companion” on your local public radio station.

Fill in the blank: Money can’t buy you happiness but it can buy you ______

I’m going to go with “It can buy you Barolo.”

That is my favorite kind of wine. It’s made from the grape Nebbiolo and comes from the Piedmont region of Italy up there sort of in the northwest. So I’m going from life experience here that it can’t buy you happiness but it definitely can buy you Barolo which is happiness of a certain sort.

Do you play tennis now?

No I can’t on account of the mandolin. I tried. I love tennis so much and one of my favorite things to do is practice mandolin while watching Roger Federer play tennis. It’s fun, you know, just watching him do what he does. There are so many lessons there for for anyone who is attempting to do something well, the ability to shake off a mistake. You know that concept of being able to lose a battle and not the war. That sort of thing and just the importance of just being being oneself in the midst of an important activity, and letting your body and your mind in your heart do the things that they know how to do.

One thing that’s really hard is turning it off, turning thinking about it off, in an effort to be 100 percent present with the people that you love at the end of the day. So for instance, my wife or my little boy, it’s not that I don’t have the energy for them at the end of the day, it’s whether I can turn my thoughts about you know these various things that I’m attempting to do, it’s whether I can turn those thoughts off and just be there. Be a husband and be a father, which are crucially important to happiness. You know to not miss these beautiful moments with my with my little boy as he’s learning how to be a person and to not miss the communion, the fellowship with my wife as those things are happening or just those moments that we can share together as little Calvin is accomplishing this or that thing.

When did you realize music could be an actual career?

Oh, I know, I was two years old when I told my parents I wanted to be a mandolin player.

At two years old how did you know what a mandolin was?

We were going to this pizza place every Saturday night at that point where there was a bluegrass band and the leader of the band played the mandolin. He was a very charismatic fellow and also a very good player. I just wanted I wanted to do what he did.

Do you remember the first time you were paid to perform?

Yeah I was seven I think. I’m pretty sure that it was for an old folks home. I remember playing for them and, you know, I was such a ham at seven years old. I’m a ham now but I was an even bigger ham then. I can remember just eating all that attention up. They’d come up to me afterwards and talk about the performance and maybe pinch my cheek. [I was] loving every minute of it, practically presenting the cheek for pinching.

I think I’ve always kind of eaten it up and then [I got a] check for 50 bucks or something. I think I wanted to spend it on baseball cards but was not allowed to. There was never really like a light switching on saying I could do this for a living. I already was doing it for a living, basically.

I understand that caffeine is a drug and that dependency is you know a dangerous state to be in. I certainly am coffee dependent.

Do you go from coffee to wine or is there a drink in the middle?

There’s a there’s a dead zone, sadly. There are certainly days when the coffee goes right up into the wine or the you know the coffee goes up into a cocktail goes into some wine. I really sound like someone with a major problem, huh? Perhaps I do, [but] I don’t think I do actually. Everything in moderation including moderation itself.

You can squeeze the life out of something through perfectionism. That you can reach a point of diminishing returns. I think just being able to pull back from something and realize that it is done, it’s good, and working on it more is not going to make it better. In fact it could make it worse. Instead turn that focus and that care and that instinct to work hard on to the next thing. I wish I had gotten that piece of advice a little earlier.