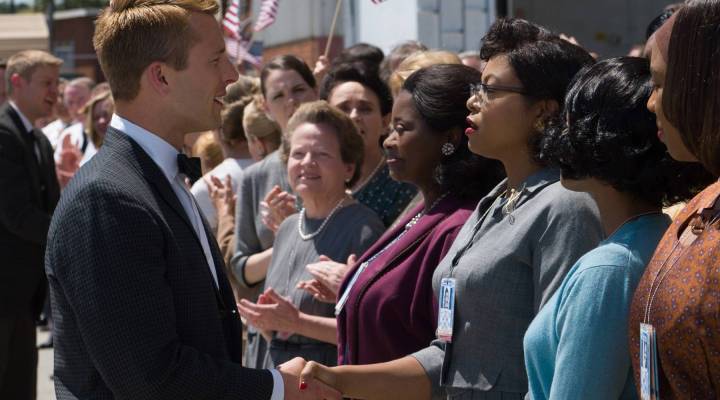 The movie “Hidden Figures” tells the story of three African-American women working as mathematicians at NASA in the 1960s during the space race. The film was based on a book of the same name, written by Margot Lee Shetterly. It was adapted for the screen by director Theodore Melfi and screenwriter Allison Schroeder.

Schroeder grew up near Cape Canaveral in Florida, and both of Schroeder’s grandparents worked as NASA engineers.

Allison Schroeder and her dad Jim at NASA when Schroeder was a child.

“The moment I read [the book proposal], I said I have to do this because I’m a NASA baby. This is how I grew up,” she said.

Schroeder used to watch rocket launches as a student in Florida.  She remembers being let out early for recess to watch the Challenger launch in 1986.

“I froze, and looked up in the sky, and saw the Challenger, and it exploded. …It is one of my most vivid early memories, and it’s always stuck to me, and it’s always been a part of my life, so to get to write this movie, and to get to show the danger , and show what it takes to get someone up there was incredibly rewarding and sort of came full circle for me.”

Schroeder said that the stories of minorities working in technology aren’t told often enough, and they need to be.

“Little girls and little boys need to have role models to look up to and know that ‘I’m not the first one. I’m not having to do this for the first time ever. Others have blazed the trail before me and I can follow in their footsteps and do the same thing.'”

Listen to the full interview with Allison Schroeder above.