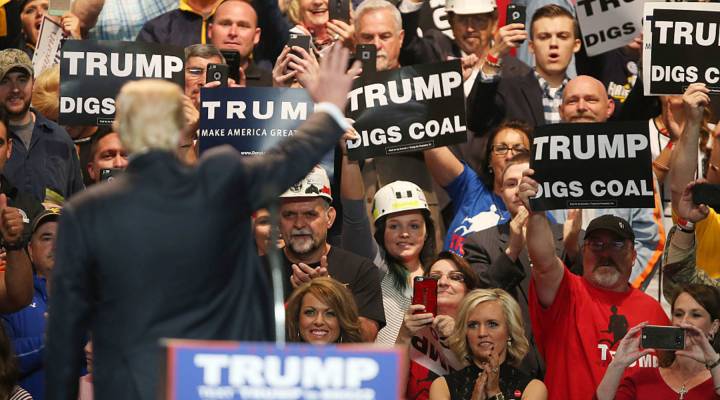 COPY
Supporters cheer for Donald Trump while he was on the campaign trail in West Virginia.  Mark Lyons/Getty Images

Supporters cheer for Donald Trump while he was on the campaign trail in West Virginia.  Mark Lyons/Getty Images
Listen Now

President-elect Donald Trump has made bold statements on energy and the environment. He has favored energy independence, and dismissed the consensus science on climate change’s impact. Trump has called for shale energy production, as well as the use of natural gas and clean coal.

Marketplace’s sustainability reporter, Scott Tong spoke to Lizzie O’Leary about what to watch for in the energy sector over the next four years.

On the possibility of changes to environmental restrictions:

A lot of people in Washington believe the EPA’s pending rules to cut carbon emissions from power plants are in danger, as are rules on the leaks of the greenhouse gas methane from oil and gas drilling in transportation. But this one thing no one in Washington – whoever the president is – can control, and that’s the market in energy. And with coal, a lot of the world demand has fallen off as global growth has slowed down. And what’s interesting is if you take market forces and allow more of them to work, and more drilling of natural occurs, that would keep under pricing dirtier coal. And so US emissions in this free market scenario could actually drop in the midterm because we are right now in an era of natural gas.

What to expect in the oil market:

We watch what happens with US drillers now. So, US oil from fracking is relatively expensive to drill, and now the price has come up. What we also know is US oil is relatively fast to the market. So with higher prices, we’re already seeing drill bits going into the ground, especially in West Texas. So then what? Right now, you have OPEC pledging to produce less, and we’re seeing prices going up. If the US produces more, then the market gets supply, possibly oversupplied again, and many believe prices could actually come back down within a matter of months in 2017. Now listen, this being the oil market, we have to be clear we go back to the uncertainty, you know, how much do we really know.