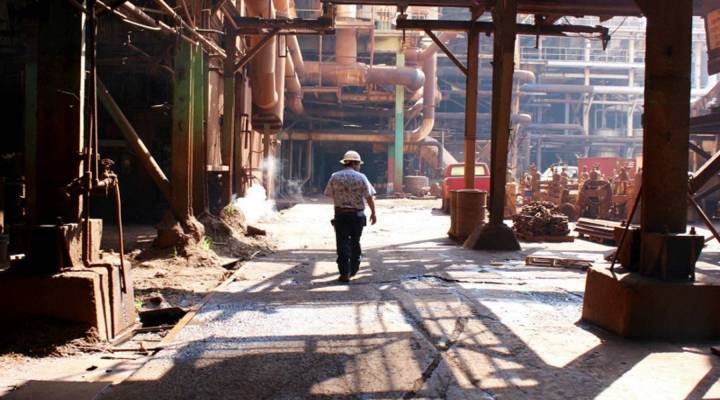 COPY
HC&S VP of factory operations Robert Luuwai, walks through the sugar mill on Maui for one of the last times. Molly Solomon

HC&S VP of factory operations Robert Luuwai, walks through the sugar mill on Maui for one of the last times. Molly Solomon
Listen Now

The second you hop into Mark Lopes’ truck, you know he works in the cane fields. His dashboard is covered in a layer of brown dust and the windshield is splattered with red dirt.

He drives to field 704, where crews set a cane fire in the early hours of the morning. By noon, much of the sugar is cleared. Lopes watches as large haul trucks get ready to head back to the mill to unload.

“He’ll drive right up to the windrow and load the hauler,” Lopes explained. “The truck will pull out, go back to the factory and unload the sugar cane.”

This month, his employer, Hawaii Commercial & Sugar Company, the last of the state’s sugar plantations, will close its operations. For many, the industry was more than just a place to work — it represented an entire way of life.

Lopes is the harvest manager at HC&S and has been doing this most mornings for the past 35 years. He’s one of 675 workers who will lose their jobs once this operation closes.

“It’s hard after you work for a company that long and it’s almost like starting over again,” said Lopes who is not sure what he’ll be doing next. “We’re the last surviving sugar plantation too. So that’s it for sugar in Hawaii.”

Like a lot of workers at HC&S, harvesting cane runs in the family. Lopes remembers visiting his father at work in the fields.

After a morning cane burn, sugar cane is loaded into a large haul truck. The cane will be brought back to the mill to be turned into sugar and molasses.

The green fields that Lopes works in every day are part of the island’s landscape. Maui resident Dorothy Pyle can see all 35,000 acres of sugar cane from her back porch.
“It’s changing us forever because I will never see 35,000 thousand acres of agriculture there again. It just won’t happen,” Pyle said from her home in Makawao. “And so the whole feel of the island, that flying in over these fields and driving through them. It’s never going to be again.”

On a clear day,  Dorothy Pyle can see both sides of the island from the back porch of her Maui home. Below are the last 35,000 acres of sugar cane owned by HC&S. The company will be closing operations this month.

A century ago, it would have been hard to imagine that sugar would fall on hard times. At its peak in the 1930’s, sugar employed 50,000 people across the islands, with annual production topping a million tons. By last year, that harvest had plunged to 165,000 tons. Sugar powered politics, wealth and even played a role in the overthrow of the Hawaiian Kingdom. The industry not only drew wealthy landowners to Hawaii, it also brought immigrants from Asia. Some were likely the ancestors of Maui resident Teri Freitas Gorman.

“Actually my ethnic heritage is what I call plantation pedigree,” said Gorman, president of the Maui Native Hawaiian Chamber of Commerce. “I’m almost in the order that they came: I’m Chinese, Portuguese, Japanese. And I’m Native Hawaiian as well.”

Gorman grew up surrounded by sugar cane in the small town of Wailuku. She remembers running in the fields and hearing the crackle of cane burns at night.

“We all called it Maui snow,” said Gorman. “The ash would fall out from the sky and you just knew they were burning cane. It was just part of life, you didn’t really question it.”

Gorman said back then, Maui was still a sleepy agricultural town. That’s a far cry from the luxury resorts and housing developments that now spread across the island. But just the smell of molasses in the air brings her back to those days.

“There’s a word in Brazilian Portuguese, it’s called “saudade,” and it means kind of a bittersweet memory. It’s bitter because you miss it, but it’s sweet because it has such wonderful feelings associated with it,” said Gorman. “So whenever I would come home to Maui from college or after traveling, that really distinctive smell of the molasses being processed, it really created that feeling of saudade in me.”

That’s a feeling Gorman, and others in Hawaii, know will now be part of the past.