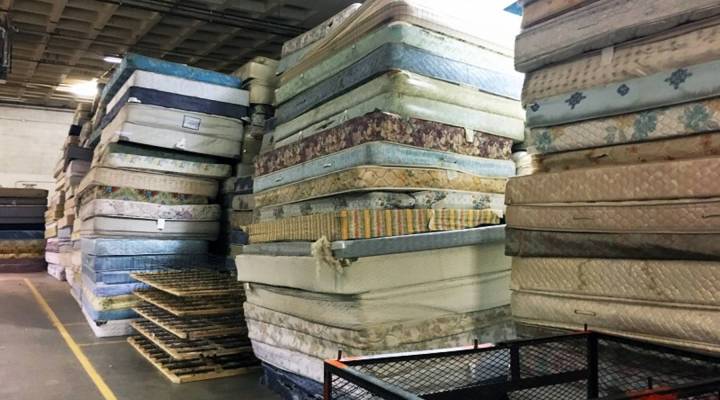 COPY
Mattresses piled on the warehouse floor at Goodwill Industries in Duluth, Minnesota. Ultimately, as part of the recycling process, each of these mattresses will be deconstructed and separated into component parts. Britta Greene

Mattresses piled on the warehouse floor at Goodwill Industries in Duluth, Minnesota. Ultimately, as part of the recycling process, each of these mattresses will be deconstructed and separated into component parts. Britta Greene
Listen Now

On the warehouse floor of Goodwill Industries in Duluth, Minnesota, mattresses and box springs are piled almost 20 high, lining the walls and walkways. Workers hustle through the maze. Ultimately, they’ll take each of these mattresses apart, stripping the fabric and foam by hand, and using a machine to peel the spring cages from their wooden frames.

Millions of mattresses and box springs are thrown out in the U.S. each year, and their sheer volume creates an expensive challenge for waste managers around the country. Mattresses are bulky and difficult to handle, even for heavy equipment. And they don’t easily compress, taking up valuable space in a landfill. Increasingly, waste officials are looking to recycling as a solution.

Duluth’s Goodwill Industries runs one of two mattress and box spring recycling programs in Minnesota. After deconstructing each unit, officials look to resell many of the materials.

“We’re getting four cents a pound [for the cotton],” said Greg Conkins, the facility’s 0perations director. “With the quilted toppers, we are receiving three cents a pound. The foam is at a current rate of 10 cents a pound, and that has been at that rate for probably eight years.”

The most valuable components are the steel coils, the spring cages. But foundries often won’t accept them in their existing form. They need to be far more compact.

“It’s like shipping air when it’s not compressed,” Conkins said.

Steel spring cages are the most valuable component of a mattress or boxspring. As part of the recycling process, they are stripped from their wooden frames and crushed into compact metal bricks.

At first, Goodwill Industries had no way around this problem. But then it turned to the Natural Resources Research Institute, an applied science arm of the University of Minnesota, for help. The Institute brought in Clint Deraas, a local inventor, to build a specialized machine to crush the springs. For Conkins, that machine made all the difference financially.

“I’m going to use the word godsend because if we didn’t have it, we would not be producing a recycling of mattress program,” Conkins said. “We wouldn’t be able to be in the business.”

Clint Deraas stands in front of the machine he invented to compact the internal spring cages from mattresses into a dense brick of steel.

Duluth Industries now recovers about $2 per mattress, with most of that coming from the steel. Still, the facility has to charge a fee for every mattress or box spring it accepts to keep its program viable.

Three states recently started asking consumers to pay this expense upfront. Now, in California, Connecticut and Rhode Island, anyone buying a mattress or box spring pays about $10 extra. That money goes to funding recycling programs, offsetting the cost of infrastructure and labor. Here in Minnesota, waste officials are watching those programs and may move to follow their example.