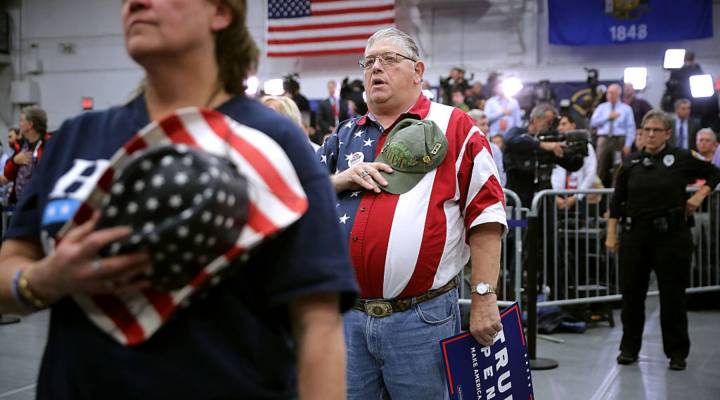 White working class voters have been at the center of political conversation and debate this year.  And given that they basically decided the presidential election, we’re likely to continue to hear a lot more from and about them. But what exactly defines working class these days?  First, some non-expert opinion:

“I just think of people like myself, people that do physical labor,” said Macon Hatton, who works in a coffee shop in Dallas, Texas.

“It used to be ‘working class poor’ – that’s what we used to say,” explained Kara Cruz, who works for a non-profit and lives in Washington D.C.

“I personally don’t think about that stuff,” added Luther Kilmer, an electrician from Dallas, Texas. “I just gotta get up and turn screws.”

The reason some people struggled to describe this group is because “there is no correct definition,” said Ruy Teixeira, a senior fellow at the Center for American Progress and author of several books on elections and the working class.

Historically, working class meant white men in blue-collar jobs like manufacturing and construction, Teixeira said. But today, a lot of those jobs have been replaced by low-level service positions in the service sectors.  And those white men have been joined by a growing number of women, African Americans and Latinos.

Teixeira said to define this group, researchers could rely on occupation or income data.

But occupation is “too expensive and hard to ask,” he said. “Income — you had to set an arbitrary cutoff and those categories change over time because of inflation. So what we’re left with is this college, non-college distinction.”

Looking at people in terms of education has fueled stereotypes.

The working class is often “depicted as ignorant. They are depicted as too lazy to get a college education,” said Joan Williams, founding director of Center for WorkLife Law at the University of California Hastings College of Law.

Williams pointed to the show “Dirty Jobs” as one of the rare positive depictions of blue-collar work.

In terms of labels, she explained that the working class often calls itself the “middle class,” while other groups – in particular elites – tend to classify this group as the poor.

It may be more useful, she noted, to define this group culturally, rather than economically.

“The classic white working-class guy had a dad who had a good blue-collar job with which he supported the family,” she said. “But today’s working class men can’t get anywhere near those kinds of jobs.”

She said many people in the working class often see success differently.  “They generally admire the rich, but resent professionals.”

“From a blue-collar standpoint, professionals just spend their whole time in office politics and sucking up to each other,” Williams said. “These blue-collar guys tell it like it is.”

She said people in the working class tend to respect those who build their own businesses.

“A lot of people dream to be on the other side of the check,” said Hatton, who works at coffee shop in Dallas.

“It’s hard for us, I would even say myself, to mentally get motivated [to start a business] cause our minds get so consumed with what we’re doing.”

In the meantime, many in the working class — like 52-year-old Danny Litaker — feel economically frustrated. Litaker, who works in construction, used to work in a textile mill that shut down in 2003.

“I’d like to see American people making their products instead of sending them overseas,” he said.

Like so many in the working class, Litaker is betting on Republicans and Trump for a brighter economic future — one that sometimes looks a lot like a return to the past.