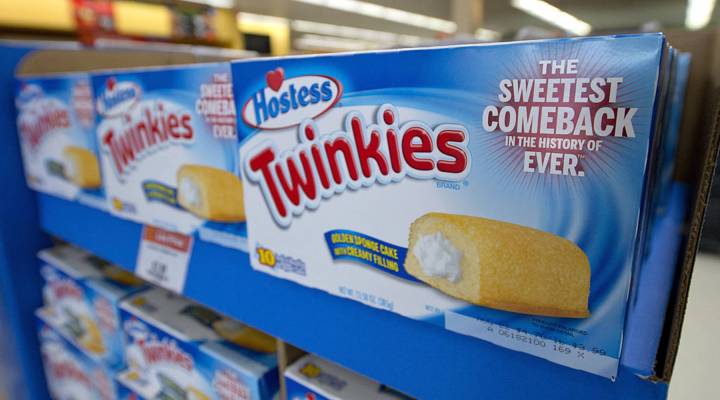 The company — in a nod to one of its most famous products, the Twinkie — listed on Nasdaq with the ticker symbol TWNK.

Hostess’ obstacles are far from over, but the offering is the first test. Will investors be interested in the 86-year-old piece of Americana? The company is trying to make a comeback during a time when consumers are increasingly looking to healthier snacks.In recent years, Hostess has gone through a lot of turmoil. Let’s look back and see how it all played out:

The company receives permission to liquidate and decides to sell its assets to the highest bidder while laying off more than 18,000 employees.  Hostess had already been suffering financially, but said it made the decision to end an employee strike. Adam Hanft, a brand strategist and CEO of Hanft Projects, told us at the time that Hostess didn’t use the Twinkie brand to its full potential (i.e., Millennials).

He was probably on to something; word of Twinkies’ demise caused a spike in interest. In some cases, people bought thousands of dollars worth of the snack cakes.

Two winning bidders reportedly paid $410 million for the brand in March 2013, and Twinkie fans were treated with the news that the sugary cakes would be back on shelves by the summer. The company announced plans to restructure, incorporate healthier alternatives and deliver a more cost-effective Twinkie; one that would last nearly twice as long.

Hostess’ new owners, Apollo Global Management and Metropoulos and Co., work on rebuilding the brand. The firms were able to reportedly triple the company’s value to almost $2 billion after two years. How did they do it? One tactic was downsizing its labor force, closing some plants and outsourcing delivery. The firms were also able to capitalize on the public’s nostalgia for Twinkies.

Hostess continued to ride that Twinkie wave, with media paying attention to how the firms may be able to turn the brand around. Forbes even called it “a miracle comeback.”

The company announced its intention to go public in July. Private equity firm Apollo Global Management LLC and investor Dean Metropoulos, of  Metropoulos and Co., strike a deal with Gores Holdings, Inc. that allows the company to go public without the risk of an initial public offering. In this deal, Apollo and Metropoulos own 42 percent of the company.