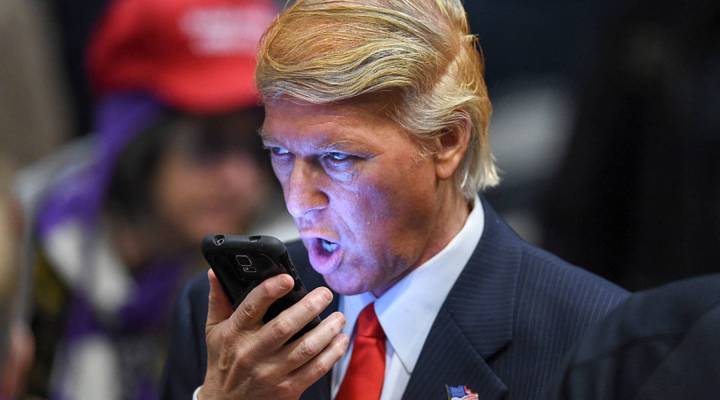 COPY
Donald Trump impersonator Robert S. Ensler speaks on a phone before a rally by the Republican presidential hopeful at the Westgate Hotel and Resort in Las Vegas, Nevada. ROBYN BECK/AFP/Getty Images

Donald Trump impersonator Robert S. Ensler speaks on a phone before a rally by the Republican presidential hopeful at the Westgate Hotel and Resort in Las Vegas, Nevada. ROBYN BECK/AFP/Getty Images
Listen Now

Everyone you know might be mad at each other about the election right now, but big corporations typically get a pass on partisan rancor. There’s a tradition for U.S. companies of not taking public stances on presidential candidates or siding exclusively with one party.

Tegerdine said he got interested in Patriot Mobile because he felt that more companies were leaning left.

“It’s always irritated me, because I always think, ‘I just wanna buy your goods and services, I don’t wanna support your politics,’” he said.

Patriot Mobile encourages customers to avoid companies like AT&T and Verizon, which it calls “Big Mobile,” because they give money to liberal candidates and PACs, although federal data show all the major phone companies donate to a mix of candidates on both sides of the aisle. This is a typical approach for large corporations: They hedge their bets and spread donations around in order to lobby more effectively on Capitol Hill.

This model wasn’t a conservative idea: It was directly inspired by Credo, an older left-wing cell company (formerly called Working Assets) that donates a cut to activist nonprofits. In 2012, a Credo super PAC helped unseat several Tea Party congressmen, and Patriot Mobile, according to its website, was a response to that.

Ray Morris, CEO of Credo, is quick to distinguish what it does from Patriot Mobile.

Is all this leading to a world where Democrats and Republicans buy different internet and phone services, shop at different stores? Lilliana Mason, a political science professor at the University of Maryland, said studies show a political cultural divide is already underway, with Democrats and Republicans more thoroughly “sorted” than they’ve ever been: by geography, race and even shopping preferences.

Campaigns use that info to micro-target potential supporters and market to them. But she said partisan marketing doesn’t make as much sense for companies who don’t want to alienate half the population. It’s not seen as a good strategy.

And things aren’t that splintered yet, even at Patriot Mobile. It’s still a small startup, so it contracts its service through Sprint — which, just like the rest of big mobile, donates to candidates from both parties, with its own interests in mind.