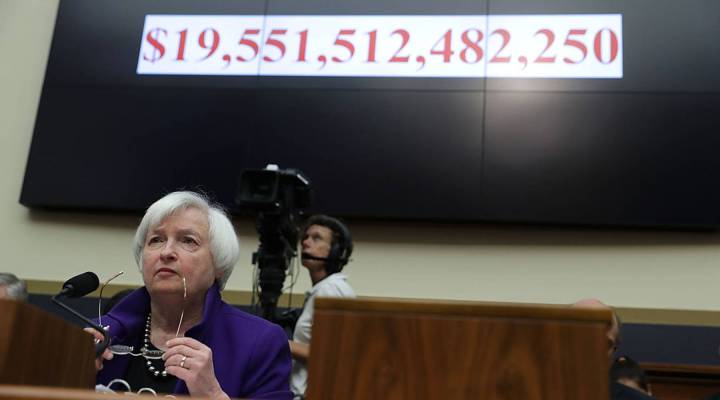 COPY
As the number of the current U.S. national debt is seen on a screen, Federal Reserve Board Chair Janet Yellen testifies during a hearing before the House Financial Services Committee on Capitol Hill in Washington, DC.    Alex Wong/Getty Images

As the number of the current U.S. national debt is seen on a screen, Federal Reserve Board Chair Janet Yellen testifies during a hearing before the House Financial Services Committee on Capitol Hill in Washington, DC.    Alex Wong/Getty Images
Listen Now

The thing about numbers:  you can slice and dice them to support whatever point you’re trying to make.  Politicians are especially good at that.

When University of Georgia economist William Lastrapes sees this, he just shakes his head.

“When politicians start talking about the federal government debt, it’s very easy to talk about the big numbers,” he said. “But you need to keep those numbers in perspective.”

Lastrapes said the $18 trillion national debt works out to around $56,500 per American. Those are big numbers, he said, but,

“I don’t see any possibility of an imminent default,” he added.

In other words, we can handle the debt.

But then there’s  the deficit – and that’s different.

Think about it this way. The debt is everything we owe. The deficit is how much we charge in any one year.  Lastrapes said both are manageable now. He does worry about the future, though. As do other economists.

De Rugy said, while the current debt is high: “It’s not even just like that we’re at a high level. It’s — we’re heading toward something that’s much higher.”

One reason why, as baby boomers age, the government will have to pay out more and more for Social Security and Medicare.  The national debt will balloon, though slowly.

“It’s not a hurricane hitting your house,” said Marc Goldwein, senior vice president of the Committee for a Responsible Federal Budget. “It’s termites. So this is going to eat at us little by little, if we do nothing to stop it.”

So, yeah.  The debt isn’t going to blow the roof off our economy anytime soon.  But it does matter.