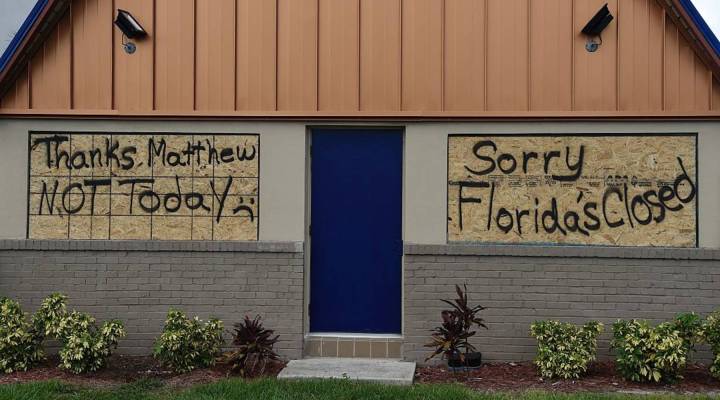 COPY
A boarded up IHOP restaurant has messages to Hurricane Matthew written on the plywood as it sits closed ahead of Hurricane Matthew on Cocoa Beach, Florida on October 5, 2016. Hurricane Matthew, the Caribbean's worst storm in nearly a decade, barreled towards the Bahamas Wednesday morning after killing nine people and pummeling Haiti and Cuba.  RHONA WISE/AFP/Getty Images

A boarded up IHOP restaurant has messages to Hurricane Matthew written on the plywood as it sits closed ahead of Hurricane Matthew on Cocoa Beach, Florida on October 5, 2016. Hurricane Matthew, the Caribbean's worst storm in nearly a decade, barreled towards the Bahamas Wednesday morning after killing nine people and pummeling Haiti and Cuba.  RHONA WISE/AFP/Getty Images
Listen Now

Hurricane Matthew is bearing down on the eastern seaboard and residents and businesses in Florida, Georgia and the Carolinas are preparing for the worst storm in about 10 years. Many communities have already been told to prepare their homes as well as possible and relocate, which isn’t cheap.

Meteorologists expect Matthew will hit Florida on Friday morning. The state has already declared a state of emergency. Brevard County in eastern Florida was one of the first to be issued a mandatory evacuation order. Jacqui McPhillips, general manager of the Tuckaway Shores Resort,  said her phone’s been pretty quiet today.

“All of our guests have now departed, we basically have an empty parking lot,” she said. “We actually had to call guests that were scheduled to come in and cancel them and that hurt.”

She said even if you’re used to this sort of emergency, it’s tough to put money away for it.

“There’s no way to budget for something that you count on some funds, but then take it back out,” she said. “It’s just the way it is.”

Florida’s governor, Rick Scott, said residents throughout the state should be prepared to relocate.

Michael K. Lindell, emeritus professor of urban planning at Texas A&M University and affiliate professor at the University of Washington, said the decision to evacuate whole cities isn’t an easy one.

“They really have to weigh the cost of a false alarm and evacuating when a hurricane doesn’t strike versus a missed event where there could be a lot of casualties and fatalities,” he said.

Because telling people to leave their homes and figure out some place to stay isn’t just about inconvenience.

Burrell Montz, geography professor at East Carolina University, said there are many direct and indirect costs with disasters.

“There are economic costs but there are other kinds of costs as well,” she said. “Social costs and more un-quantifiable kinds of things.”

That’s what’s been so difficult for the scientific community. There isn’t a whole lot of reliable data about how much natural disasters cost. And there’s no insurance for hurricanes. People in high risk zones get flood insurance. And only those areas that are directly affected should expect to be reimbursed.