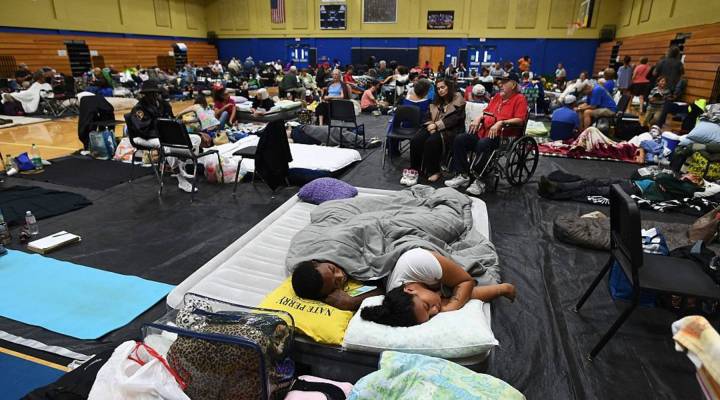 Evacuating before a hurricane — preparing the house, stocking up on water and gas, dealing with pets — is tough and expensive. But it can be much harder for people who have chronic illnesses and may need dialysis, a power source for their wheelchair or critical medications.

More than 500,000 Americans who rely on things like oxygen tanks and cardiac devices live in the path of Hurricane Matthew, and many are being forced to leave.

Dr. Maina Gatonye, chief medical officer for Chen Senior Medical Centers in South Florida, has been working the phones for the past several days, calling patients with conditions like diabetes and kidney failure. In the run up to the storm, staff identified the most vulnerable 400 to 600 patients.

“We made sure that they had their medication,” he said. “Did patients have any needs? Are they having any shortness of breath right now?”

Now, Gatonye said, patients are getting whatever they need. “If a patient was running out of their oxygen, that oxygen was made available at no cost because it’s an emergency situation,” he said.

Not every sick patient is so lucky.

Federal statistics show more than 50,000 Americans on Medicare need dialysis in the states most likely to get hit by Matthew.

“When you evacuate it’s a very stressful situation. You are away from your support system,” said Dr. Nicole Lurie of the Department of Health and Human Services. She said  in the past chronically ill patients have struggled to survive during natural disasters.

“We know stress exacerbates disease, it makes it worse,” Lurie said. “And we know when your disease gets worse you have a higher chance of dying from it.”

Studies show in wake of these terrible floods and hurricanes visits to emergency rooms and hospitals spike by as much as 25 percent.

Dr. Rick deShazo at the University of Mississippi Medical Center said they saw that first-hand after Katrina.

“It’s a matter of leadership. Medical centers, private hospital systems are in a position to provide a great amount of care to these folks,” he said.

Federal emergency officials are staffing the Disaster Distress Helpline at 1-800-985-5990 to provide immediate crisis counseling to those affected by Hurricane Matthew.