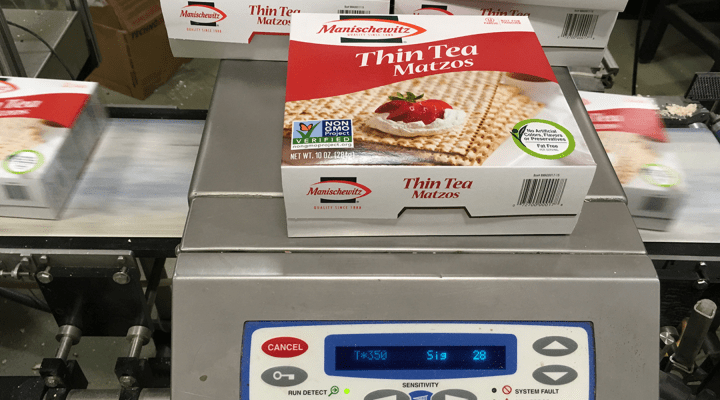 COPY
Manishewitz is focused on providing consumers with the same options they see available in mainstream products, like non-GMO offerings. Sally Herships/Marketplace

Manishewitz is focused on providing consumers with the same options they see available in mainstream products, like non-GMO offerings. Sally Herships/Marketplace
Listen Now

For Jews, the Manischewitz plant can feel like Willy Wonka’s chocolate factory.

“Very few people from outside our company have ever been in this room, so this is going to be very exciting for you,” said David Sugarman, Manischewitz’s president and CEO, as he unlocks the door to a sample room. It’s Rosh Hashanah, the Jewish new year, and to celebrate, the Newark, New Jersey-based Manischewitz is opening its factory doors to the public. For the first time ever, it’s giving regular tours. This is where the matzoh magic happens — there’s a lot of it here.

Boxes of matzoh varieties line the shelves: organic spelt, egg and onion, Mediterranean.  Sugarman says the 128-year-old company is trying to keep up with food trends.

“If you think back to the history of Jewish food, it really was what we’ll call peasant food,” he said. “It was food for immigrants coming over from the old country. Plain food like gefilte fish, borscht and matzoh really were the staples of the time.”

But as the Jewish community established itself and became more sophisticated, Jewish foodies began looking for groceries that were more exciting than what their parents ate.

To celebrate today’s tour, there are balloons and visiting schoolchildren. Even the mayor of Newark is here. There are speeches, local TV crews and applause. Soon, it’s time to hit the factory floor. Inside are giant machines, conveyor belts and ovens. We all don white jackets and blue hair nets. Some of the workers are orthodox and bearded, so they also have to wear beard nets. But Manischewitz is kosher. Which means there are also extra requirements in addition to normal food-safety rules,.

“It’s absolutely critical that the Matzoh has to get into the oven within 18 minutes or it’s not kosher,” said Sugarman. “It goes back generation after generation – thousands of years. It’s all to do with that there’s no chance of the matzoh rising,” he says.

To ensure that that rule and others are followed, five mashgiach are on duty. The mashgiach look like rabbis, with yarmulkes and beards, but they’re not. Instead, they’re trained rabbinical observers. They watch over the conveyor belts to make sure the rules are followed. But it’s not enough just to be kosher. Products still have to stand out at the grocery store.

Mashgiach, trained rabbincial observers, work to make sure all the strict food preparation rules, required to ensure that Manishewitz’s products be certified as kosher, are followed.

“Almost every major product today has kosher certification,” said Menachem Lubinsky a kosher marketing consultant and president and CEO of Lubicom Marketing. “You can walk into a Whole Foods market, and you’d be surprised how many of them carry kosher symbols.” Coke, Pepsi — even Cheerios. Lubinsky says the market for kosher food is worth more than $12.5 billion.

“The kosher market goes well beyond those people who are eating kosher because they observe the Jewish dietary laws,” Lubinsky said. “Muslims who do not eat pork, seventh day Adventists,” also shop kosher.

There are, of course, are consumers who just like the products, he points out: “For example, kosher salt, kosher pickles, kosher deli.”

Liz Alpern is a co-owner of Gefilteria, a Brooklyn-based food venture that makes artisanal gefilte fish. She says the majority of Jews in the United States are Ashkenazi, originally from Europe. But the foods they brought with them, like borscht and gefiite fish, were in need of an update.

The star of the cuisine? Sephardic cuisine and Israeli cuisine. And, most especially, hummus. “It’s everywhere, it’s all the time it’s on every sandwich,” Alpern said.

Now, says Alpern, there is a demand for updated classics. Perhaps not for packaged foods, but instead, raw ingredients people can cook at home, or for restaurants where they can sample updated foods like gefilte fish.

Back at the Manishewitz plant conveyor belts are shooting Matzohs into an oven – at a rate of about 750 a minute. Not every food can be a Hummus, but Manishewitz is trying.