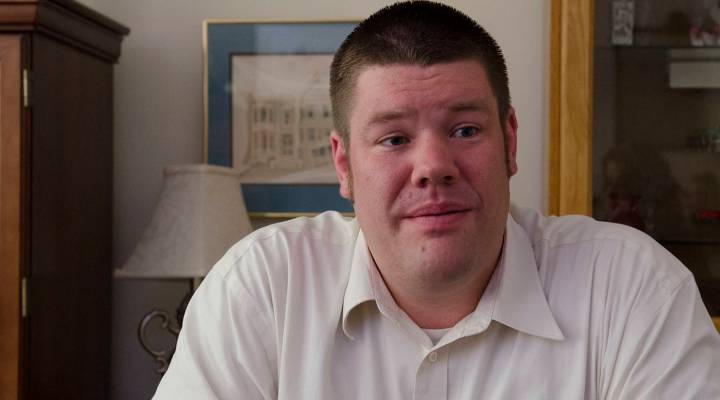 COPY
Chris Savelle discusses his student loan debt with Lizzie O'Leary at his home in Troy, Michigan.  Eliza Mills/Marketplace
How The Deck Is Stacked

This is the latest installment of our series on the American economy,“How the Deck Is Stacked,” reported in conjunction with Frontline and PBS NewsHour. To listen to Marketplace Weekend’s full coverage of student loan debt, click on the audio player above.

Forty-two million people in the United States have student loan debt, a total of about $1.3 trillion worth of outstanding debt. It’s a big number, even considering the fact that the biggest reason there’s so much student loan debt is because more and more people — and not just those whose families can afford it upfront — are going to college.

The average amount of debt on student loans is about $37,000, but whether someone owes $5,000 or $100,000, debt can cast a shadow over their entire life. And not all debt feels the same. Someone who graduated from a four-year university might be better able to manage their debt load than someone who dropped out of a community college or a for-profit after a few semesters.

Jen Smith knows what that’s like. She’s the first person in her family to go to college — she went to the for profit International Academy of Design and Technology (IADT) in Chicago. She left after a year and a half. IADT’s parent company has since closed several campuses. When Smith went back to school to get her nursing degree, she found out the credits she earned there didn’t count.

“I didn’t know that those credits would be worthless,” Smith said. “Who would sign up for something like that?” Since leaving IADT, the original $27,000 loan Smith took out has ballooned to $45,000. She has a job in human resources now, while working towards her nursing degree.

Sandy Baum, who studies debt at the Urban Institute, says that for a majority of students who attend traditional colleges, debt isn’t a crisis, or even a problem. “They don’t like repaying their debts, but they’re fine,” Baum said. “Their earnings premium from going to college is far higher than is necessary to pay back those loans.”

The for-profit schools present a different problem. “We have too many people borrowing to go to institutions, and programs that we know in advance are not going to serve them well,” Baum said. “That’s a crisis.”

Like IADT, some other for-profit programs have struggled, or even shuttered in recent months. Corinthian and ITT Tech collapsed, leaving thousands of students with ruined credit, and, potentially, piles of debt.

But in the last 15 years, loans have become a bigger issue for traditional schools, too. Part of the reason is that the cost of attending a public university has gone up by 54 percent since 2000.

Sara Goldrick-Rab,  a professor at Temple University who studies the price of higher education, said “the major thing driving that increase is that states used to fund public higher education. They withdrew some of their support and in doing so, somebody has to pick up that tab and they basically decided that the people going to college and their families should pay for that.”

For students who started school in the years before the recession, the price change was acute. Chris Savelle, who studied finance at Central Michigan University, said the price of a credit went up dramatically — from $148 when he started school in 2002 to $324 by the time he graduated in December 2008.

Toby the dog stares out the window at the home Chris Savelle shares with his mother and sister. After his father died and his mother was laid off, Chris began supporting his family while paying off his student loans.

Savelle has about $100,000 in loans, and pays $1000 a month on the interest. He doesn’t blame his school for his debt load, though. “I did this to myself,” Savelle says,  “I knew, when I was taking out these loans, that I was building up a bigger and bigger debt burden but told myself ‘I’ll have a good job when I get out of college.'”

Savelle wanted to work on Wall Street as a trader, but finding a good job during was harder than he anticipated it to be. After six months of unemployment, he got a job as a manager at a Walmart.

“We used to make jokes in that store because it was one of the most well-qualified Walmart stores I think we’ve ever seen. The number of laid-off engineers was amazing,” Savelle says.

After nine months at Walmart, Savelle got lucky, and found a job in supply chain engineering. It wasn’t high finance, but he likes it, and makes $85,000 a year, enough to support his mother and sister and cover rent for the house the three of them share, make payments on his loans and save a bit for retirement.

Even though his debt is in a manageable place now, Savelle’s loans continue to have a major impact on him and his family. His younger sister, Katie, is terrified of debt. She dropped of college after one semester because she wasn’t happy, and immediately paid off her debt with earnings from a part-time job at a bakery. She’s not sure if she’ll go back to school, but is considering a trade certificate instead of a four-year program.

Having six figures in student debt isn’t the norm — Savelle is an outlier. But he’s also a study in what happened to a generation of students whose time in school coincided with rising prices and stagnating middle class wages.

“The people who are most impacted are low income, African American, Latino families who finally put a child, put their family through college, and now seeing they are stuck with this lifetime of debt that even if the parents and grandparents try to help, they can’t seem to ever make the payments,” said Lisa Madigan, an Illinois attorney general who is pushing loan servicers  — companies who collect payments and process loans — to automatically enroll borrowers in income-based repayment plans.

Illinois Attorney General Lisa Madigan in her office in Chicago. Madigan is pushing for loan servicers to enroll borrowers in income based repayment plans.

Income-based repayment is an option for all borrowers, but many don’t know that they’re eligible and many complain that debt servicers don’t assist them in finding a manageable solution. Instead, they push them to make the highest payments possible.

Almost all student debt is owned or guaranteed by the Federal government — in 2010 the government took over making federal loans, often contracting loan servicers.

Servicers will make about $2 billion in commission from the Department of Education this year, but many borrowers have complaints about the way servicers handle their loans.

The Consumer Financial Protection Bureau (CFPB) monitors complaints about loan servicers and is working to create and enforce guidelines for loan servicers, to make sure that the billions they collect from the government to collect on federal loans are going towards services that make repayment more manageable for families.

CFPB Ombudsman Seth Frotman said, “there are supposed to be protections for all of these borrowers who thought they were doing the right thing by going to school, taking on this historic level of debt, and the promise kind of was ‘you’ll never have to pay more than you can afford.’ And the very companies that are supposed to be ensuring that is the case are essentially failing borrowers for a second time.”

“One of the things that the bureau has been working toward, through public enforcement actions, through the first ever federal oversight of these entities, is ensuring that illegal practices will no longer be tolerated,” Frotman said.

The Department of Education oversees the contracts with loan servicers, and recently made an announcement about their expectations for future compliance, which would start in 2019.

Frotman said that the CFPB is pushing for more immediate action. “The bureau has new tools at its disposal, so if we find that a company’s practices are unfair, deceptive, or abusive, we have the ability to take action,” he said.

“The challenge that we face in this space is that when a market essentially doubles over a very short time, like we saw in this student loan context, the question is, have the regulators, have the people overseeing the market, have the rules kept up. In this case, they haven’t,” Frotman said.

Any potential changes to the system, from pricing to collection to forgiveness, may not come fast enough for borrowers who are already saddled with student loan debt. But for the next generation of college students, bearing witness to struggles with student loan debt have already prompted a new outlook: asking whether a traditional college education has become too much of a financial risk.