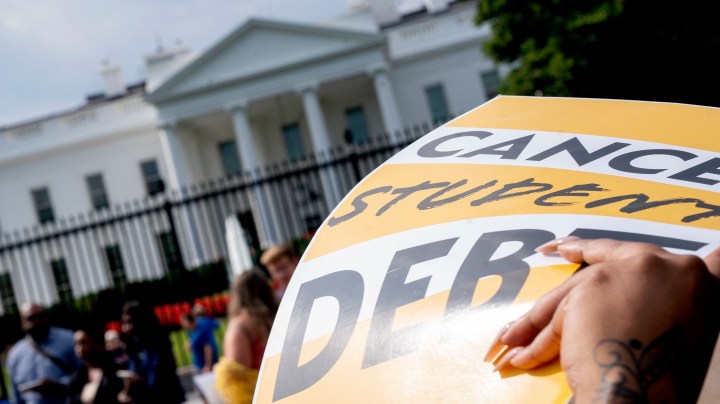 COPY
Because of the high interest rates on student loans, the amount owed continues to grow for many borrowers in income-driven repayment plans. Stefani Reynolds/AFP via Getty Images

Because of the high interest rates on student loans, the amount owed continues to grow for many borrowers in income-driven repayment plans. Stefani Reynolds/AFP via Getty Images
Listen Now

When President Joe Biden announced his plan for student loan forgiveness last week, he also proposed big changes to existing income-based repayment programs. One such change: Going forward, the federal government would cover the unpaid monthly interest for borrowers who are paying back their loans.

Interest rates on student loans can be high — between 4% and 8%. For many borrowers in income-driven repayment plans, that can mean the amount they owe continues to grow, even when they’re making payments.

Take this example from Betsy Mayotte at the nonprofit Institute of Student Loan Advisors: “Let’s say you have a borrower that’s accruing $100 a month in interest, and their calculated income-driven plan amount is $50.”

They’re paying $50 a month toward their loan but also accruing $50 a month in interest, which is added to the principal. “But under this plan, the government would forgive that extra $50,” Mayotte said.

And the borrower’s balance would not keep growing. That would be especially significant for Black borrowers, who tend to take out larger loans and enroll in income-based repayment, according to Fenaba Addo of the University of North Carolina at Chapel Hill.

“The Black-white debt disparity grows over time, in large part, because white borrowers are able to pay down their debt faster.”

While Black borrowers, she said, are more likely to struggle to make payments right after college — and watch their loans grow.