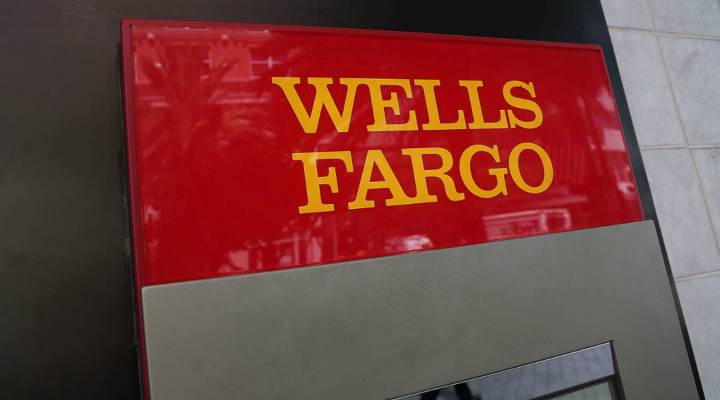 COPY
More than 5,000 Wells Fargo employees have been fired as a result of the company's fake accounts scandal. Joe Raedle/Getty Images

More than 5,000 Wells Fargo employees have been fired as a result of the company's fake accounts scandal. Joe Raedle/Getty Images
Listen Now

John Stumpf, CEO of Wells Fargo, will be in front of the Senate Banking Committee on Tuesday, where he’s expected to show contrition over what’s been a growing scandal.

It’s come out that, over a period of many years, Wells Fargo employees opened more than 2 million accounts and credit cards in people’s names without their permission, sometimes leading to overdraft fees or credit report problems unbeknownst to the customers.

The false accounts were an attempt to keep up with high-pressure sales goals. Opening multiple accounts with each customer was part of Wells Fargo’s long-term business plan for retail banking.

Jim Griebel of Valley Springs, South Dakota said  his daughter had an entry-level teller position at Wells Fargo a long time ago, and he remembers there was a lot of pressure, and even shaming, to get employees to cross-sell products and meet quotas.

“One of the biggest problems was angry customers, because they were getting badgered time and time again to sign up for these cards,” he said. His daughter quit after less than a year.

But more recently, Griebel became a Wells Fargo customer himself, with multiple accounts — and then something strange happened.

“About two years ago we got a call from a Wells Fargo employee,” he said.  The employee told his wife that they needed to attach a debit card to several deposit accounts; it was presented as a requirement, not a choice. His wife agreed to it, but he didn’t want debit cards, so he called a manager. It was at that point he learned that his wife had been lied to. There was no requirement to get a debit card.

“I don’t know if I would call it illegal, but it was certainly unethical,” he said.

Wells Fargo has fired 5,300 people related to the false accounts, and will pay a fine to federal regulators as well as the Los Angeles City Attorney’s Office — it was in L.A. that the scandal was first reported, and the city led the way with a 2015 lawsuit.

Wells Fargo has also conducted its own internal investigation, and paid back $2.6 million in fees to duped customers. While the company has acknowledged the problematic sales practices, it has tried to frame them as outliers who have already been held accountable.

But insiders have alleged that the bank’s regional managers put a high amount of pressure on low-level employees, who strove to meet quotas in order to avoid penalties or receive financial rewards. Frontline bank workers are the lowest paid in the banking industry, often making less than a living wage.

“That cannot happen unless leadership allows it to happen,” said New Jersey Senator Robert Menendez, who’s part of a group of senators asking the company whether it will take back bonuses from senior employees who may have been rewarded for this sales strategy.

Wells Fargo declined comment for this story, but it just announced last week that it will do away with individual sales goals.

Menendez said part of the goal of the hearing is not just to put Wells Fargo on blast, but to put other banks on notice.

“I hope Wells Fargo is the outlier, but I don’t know,” he said.