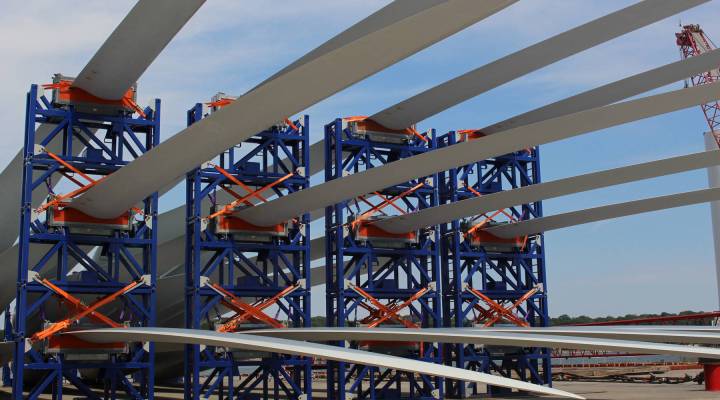 COPY
Wind turbine blades at a port in Providence, prior to being installed. The first off-shore wind farm in the U.S. is nearing completion off the coast of Rhode Island. Ambar Espinoza/RI Public Radio

Wind turbine blades at a port in Providence, prior to being installed. The first off-shore wind farm in the U.S. is nearing completion off the coast of Rhode Island. Ambar Espinoza/RI Public Radio
Listen Now

The first off-shore wind farm in the U.S. is nearing completion off the coast of Rhode Island. In the past there’s been opposition to these ventures. But this one, which has been planned as a demonstration project, has managed to go forward.

A Rhode Island company, Deepwater Wind, is behind this nearly $300 million project. The five turbines were recently finished after more than a year of construction.

“The first off-shore wind farm in America will be ready to start spinning its blades, and that’s a momentous occasion, believe me,” said Jeffrey Grybowski, Deepwater’s CEO and a former chief of staff for Rhode Island Gov. Donald L. Carcieri.

Grybowski showed off wind turbine blades at a recent tour of the Providence port where components are stored. The blades are really huge.

“Each blade is 241 feet long and weighs about 29 tons,” Grybowski noted. “These are the largest wind turn blades in North America. You get the idea that this is a really big, complicated construction project.”

The big blades enable the turbines to produce twice the amount of electricity as earlier models. The turbines are 15 miles from the Rhode Island mainland, so consequently, they haven’t aroused the kind of controversy on-shore projects have in the past.

“Our approach is to identify areas and technologies that will allow us to avoid the controversy entirely by locating the wind turbines over the horizon so that the people who don’t like the way they look, don’t have to look at them,” said Clint Plummer, Deepwater’s vice-president for development.

For residents of Block Island, the turbines are just three miles off shore. But they do get something in return: the elimination of noisy, polluting generators, which burn a million gallons of diesel a year. The wind power will cost about the same as the diesel-generated electricity. Still, that’s nearly triple the rate mainland customers pay. And that price will rise every year for 20 years.

Wind turbine towers at a port in Providence before being installed.

About 22 miles to the southwest of Block Island sit the Hamptons on the east end of Long Island. Deepwater wants to build its next wind farm there, with scores of turbines a distant 30 miles off shore from the upscale beach communities. That’s meant there’s been little opposition from the well-heeled locals.

“Truthfully, if a wind farm of this size was being proposed off the shore of East Hampton or Montauk, and it was visible and it was 10 miles away, I might feel differently about it,” said Larry Cantwell, the town supervisor in East Hampton, which has set a goal of 100 percent renewable energy by the year 2020.

But there is another constituency which isn’t so keen on these off-shore wind farms: commercial fishermen. In this part of the Atlantic they catch squid and cod, and there’s a scallops fishery, which alone generates a half billion dollars a year. They’re worried that their livelihood will suffer. And in fact, in Rhode Island commercial fishing was disrupted during construction and one operation had to be relocated.

But Karl Grossman, a veteran environmental reporter who covered the decades-long battle to build nuclear power plants on Long Island, said other than the commercial fishermen, Long Islanders seem to be embracing this new form of renewable power.

“This is energy we can live with,” Grossman said. “I think we’re seeing an energy revolution in the making. I’m a sailor, and the winds off Long Island are virtually always blowing.”

In fact, the wind is blowing up and down the East Coast. Federal officials have granted leases for 11 off-shore wind farms from Massachusetts to Virginia, and a 12th was recently proposed off the coast of North Carolina.

This story has been updated to clarify the wind farm’s visibility from the mainland.