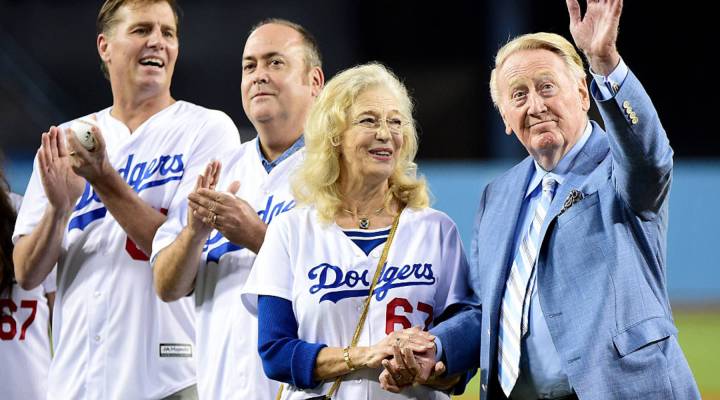 The Los Angeles Dodgers’ last six regular games of this season are getting some special treatment, thanks to the team’s announcer Vin Scully.

As one the most well-known voices in baseball, Scully’s final season prompted local television station KTLA-Channel 5 to air the broadcasts of each game. The station announced its plans, which will make the game available to all of Southern California, today.

It’s a rare occasion given the complexities typically associated with the business of broadcasting sports. As Yahoo pointed out, the Dodger’s own sports network, which airs 150 games a year, is only available for subscribers of Time Warner Cable and Charter, but KTLA-Channel 5 comes with every standard cable package. The station’s broadcast will also mean people who live in MLB.com blackout zones will be able to view the game.

Here’s a look at some of the numbers from a career that made him the “greatest broadcaster in baseball history”:

67th: This is Scully’s 67th season as the voice of the Dodgers. The announcer joined the Brooklyn Dodgers’ team of broadcasters in 1950, just one year out of college. He moved with the team to Los Angeles in 1958. During his tenure, he has seen the ownership of the Dodgers change 18 times.

1982: In 1982, Scully was inducted into the broadcaster’s wing of the National Baseball Hall of Fame and got his own star on the Hollywood Walk of Fame. Coincidentally, 1982 was also the same year the Dodgers named a street that ran through their spring training residence in Florida after Scully. Other things named in honor of Scully: a baseball field in Bogota, N.J., the city he lived in when he was working with the Brooklyn Dodgers, and more recently, a street near Dodgers Stadium.

89: When Scully retires in October, “the voice of baseball” will be one month away from turning 89 years old.

6 rings: Scully received the rings for all five of the the Los Angeles Dodgers World Series championship wins, but wasn’t given a ring for the Brooklyn Dodgers’ 1955 win because only “uniformed personnel” were able to receive one. He finally got the ring in 1995, thanks to a serendipitous encounter.