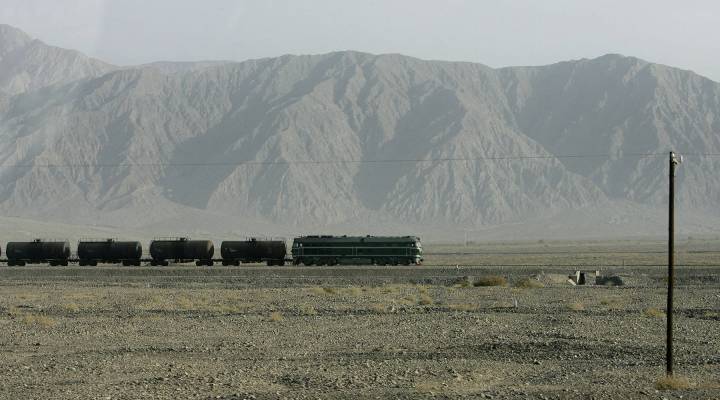 Oil and its downstream products enable most transportation methods, from the gas in automobile tanks to the rubber in shoes. For oil itself, however, there are only a few methods of movement, and each is controversial. In the U.S., one method that saw a recent boom is now on the decline.

Shale oil pumped in recent years from the Bakken region in North Dakota ramped up production and availability faster than pipelines could be built. Trains filled in the gap in the meantime. At its peak, in October 2014, trains moved more than 29 million barrels.

The most recent data from the Energy Information Administration shows that the amount of oil shipped by rail has fallen dramatically since.

Several factors have contributed to the more-than-half decline in shipments. One is that the price of U.S. oil has risen to more closely match global prices. That has reduced the amount of oil being purchased and shipped to refineries.

While those factors have led to a temporary reduction in the need for crude-by-rail shipping, the completion of additional pipeline infrastructure around the country has made more of a permanent change.

“New pipelines are still getting built, further pushing down the need for crude-by-rail,” said Adam Bedard, CEO of ARB Midstream, a company that invests in pipelines and rail facilities.

Bedard said the biggest impact to crude-by-rail shipments may come later this year, if construction is completed on the Dakota Access Pipeline, which would move oil east into Chicago.

The future of that pipeline is being decided. Protests have temporarily halted construction of the Dakota Access Pipeline, partly because of concerns for the safety of drinking water.

Safety issues plague perception of crude-by-rail as well. In the past four years, there have been a dozen significant derailments of trains carrying crude oil in the U.S., spilling more than 1.5 million gallons, according to the Federal Railroad Administration.

Brett VandenHeuvel, executive director of Columbia Riverkeeper, said his organization is fighting to reduce or eliminate the traffic traveling through the Pacific Northwest. An oil train derailed in Mosier, Oregon, in June, spilling an undetermined amount of crude.

“We think oil trains are dangerous,” said VandenHeuvel. “We’ve seen explosions very close to our homes here on the Columbia River and have watched explosions and derailments all over the nation, and we think it’s not a safe way to transport oil.”

The overall decline of oil train traffic in the U.S. doesn’t extend to his region, as the network of pipelines on the West Coast is largely isolated from the rest of the country. Trains are necessary. Canada, as well, is expected to see an increase in crude-by-rail because it lacks comparable pipeline infrastructure.

VandenHeuvel said his organization will work to keep more terminals from being constructed that would bring in more rail traffic. He said he’s concerned more will come if oil prices rise again.

“You know, that number could ramp back up as production increases,” VandenHeuvel said.