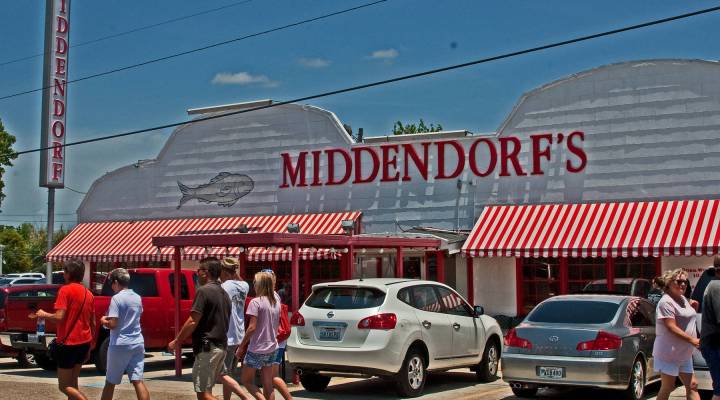 Horst Pfeifer and his wife, Karen, run Middendorf’s, a catfish restaurant north of New Orleans. Pfeifer has been flooded out three times since he bought the restaurant in 2007. The restaurant is on a causeway between Lake Pontchartrain and Lake Maurepas, which both collect floodwaters from the Mississippi and the lowlands along it. We talked with Pfeifer about what it’s like to run a business in a place where high water is an inevitability.

On how he looks after his employees during floods:

We have 75 employees … Well, the one thing we did is we normally have outside for boaters, a deck where they eat and its normally counter service so when I took my old building down, I put air conditioning out there so I keep all the employees employed to get the full paycheck since the toughest time was the last few days, people who were not necessarily flooded, but couldn’t come to work. It’s hard for everybody right now with people cleaning out their houses at the same time you have to work to make a living, I mean the last two weeks for us, not only the flooding but also you know we’re doing only 10-20 percent of normal business.

The interior of Middendorf’s Restaurant, just outside of New Orleans, Louisiana.

On how he stays in business:

Well, the one thing is I tell you one thing, when 9/11 hit I always had a cash reserve for devastating times and then when Katarina hit I increased it where I want to make sure I have plenty enough to hold on for at least 6-7 months. Money I put on the side for in case something happen. Since even if you don’t get hit, the impact it has the storm from not having business and taking care of your employees and everything else you know it keeps on going, the pays going. And we have to do it ourselves and be smart about it and not lean on everybody else.