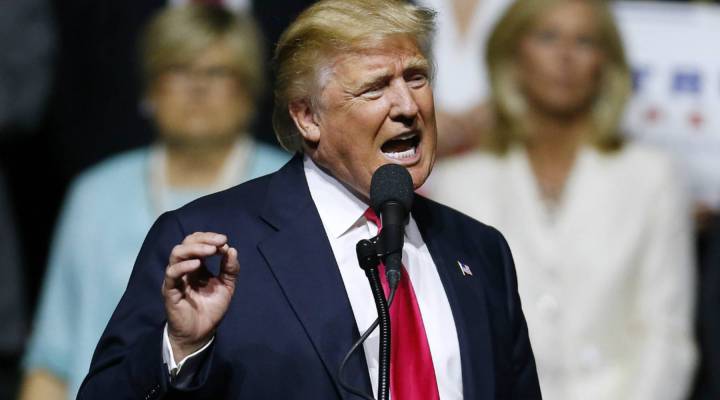 Republican presidential candidate Donald Trump is making the economy a central issue this election season, as so many before him. His chief economic beef? Bad trade deals. The polling firm Gallup has released a massive study of Trump supporters, aiming to better understand, through income and employment data, why trade has become so unpopular among them.

Jonathan Rothwell, senior economist at Gallup and author of the study, speaks to Marketplace Morning Report host David Brancaccio about his findings.

On whether trade is hurting Trump supporters:

It struck me that a very reasonable hypothesis would be that they live in areas that have seen larger declines in manufacturing jobs, more exposure to competition from China. It turns out that that’s not the case. They are more likely to work in blue-collar occupations generally, and that includes production jobs that would certainly be likely to be in the manufacturing sector. They’re also more likely, or at least among male Trump supporters, to work in jobs like construction, installation, maintenance, repair and transportation — none of those are really exposed to trade competition.

On whether Trump supporters are worse off economically:

If you compare them to the average American, they earn a little bit more. If you compare them to the average white American, they earn a little bit less. They are in disproportionately blue-collar occupations, but occupations that pay fairly well… The bottom line is that there are many economic forces besides globalization that are bearing down on people’s lives. It certainly could be the case that Trump supporters are experiencing serious economic stress. Indeed, I find that despite the fact that they have somewhat higher incomes than the average American, they live in areas that have lower health, measured by white middle-aged mortality. So white middle-aged mortality is higher… I also find that intergenerational mobility, which compares the incomes of parents to the incomes of their grown children, is lower in the communities of Trump supporters.

Click on the audio player to hear more about the economic and social realities of Trump supporters.