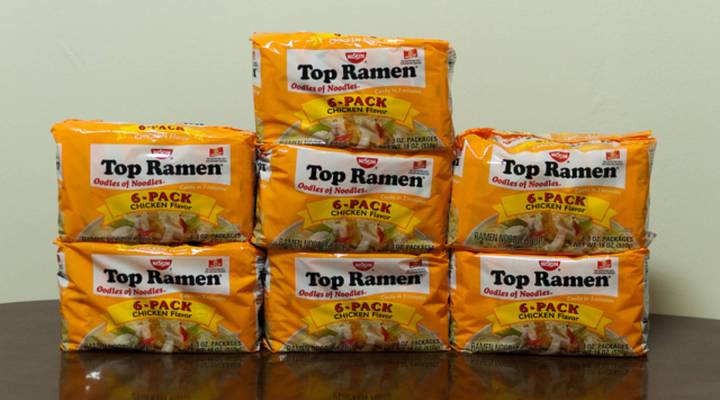 Ramen noodles are now the currency of choice in prison, according to a year-long study of one state penitentiary.

The change reflects the worsening condition of prison food services due to privatization, according to the study’s author Michael Gibson-Light, a University of Arizona doctoral student scheduled to present his findings to the American Sociological Association today. The specific prison he studied had no smoking ban, unlike other prisons, yet inmates still chose ramen noodle packets — called “soups” — over other goods, like stamps and envelopes.

“Prisoners are so unhappy with the quality and quantity of prison food that they receive that they have begun relying on ramen noodles — a cheap, durable food product — as a form of money in the underground economy,” Gibson-Light said in a press release. “Because it is cheap, tasty, and rich in calories, ramen has become so valuable that it is used to exchange for other goods.”

Gibson-Light’s report, “Must Work for Food: The Politics of Nutrition and Informal Economy in an American Prison,” comes shortly after the U.S. Department of Justice announced that it will phase out the use of private prisons, citing subpar services from the companies in charge.

While the prison where Gibson-Light spent a year observing and interviewing inmates and staff is a state-run facility, many services — including food — were contracted to private firms. He concluded that declining food services caused the value of ramen packets to rise, overtaking cigarettes even when other food items did not do the same.

So what makes good prison money? Gibson-Light outlined several factors: It should be durable and portable, a “highly demanded commodity,” relatively easy to get, and can be eaten or turned into something “useful.” He charted the value of ramen, which cost 59 cents a packet, against other items that can be purchased at the prison commissary.

Ramen has been a viable form of currency in prisons for some time now and “Prison Ramen,” a cookbook released last year, shed some light on how easy it is to cook the instant noodles inside a cell, but Gibson-Light’s study details the change in demand for ramen and other food products over the past decade. Currency went from items that you wanted, like cigarettes, to items that you needed, like consumables.

In the early 2000s, the prison switched from contracting with one firm to another for its food preparation, and the change led to smaller servings and less meals, according to Gibson-Light’s interview with prisoners and staff.

One staffer told him, “The prison used to control their own food. “They were spending two dollars a tray [per inmate per meal]. Now that we’re in charge, we only charge the client one-point-two-four-nine-one dollars per tray—basically a $1.25.”

Gibson-Light’s report had many firsthand accounts of the changing conditions of food service on the site and how it relates to the rise of ramen as currency. Additionally, the rising price of ramen also feeds a shadow economy of odd jobs because inmate wages are low, according to the study.

“One way or another, everything in prison is about money,” as stated by a soft spoken inmate in the prison sign shop called Rogers. “Soup is money in here. It’s sad but true,” said Porter. As Santos succinctly put it, “you can get a lot with soups.” Lou would go a step further to state that “a soup is everything” and many people will trade anything they own to get one. He explained: It’s ‘cause people are hungry. You can tell how good a man’s doing [financially] by how many soups he’s got in his locker. ‘20 soups? Oh, that guy’s doing good!’ […] People will pay more for an envelope when they need to write home to get more soups! Prison is like the streets—you use currency for everything. In here, [shrugging] it’s soups.