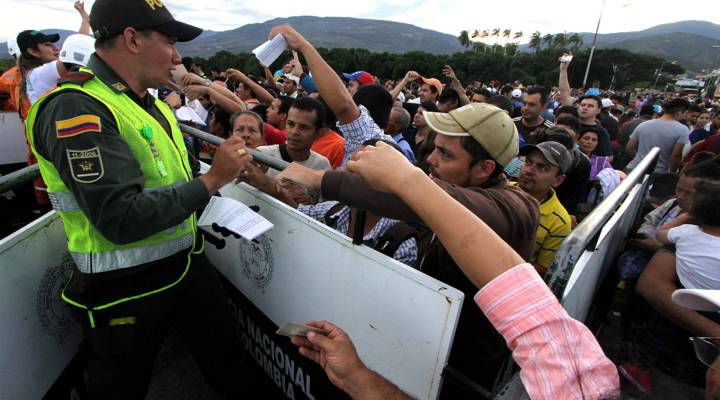 Last year, Venezuela closed the border with Colombia because, it said, smugglers and organized crime were ruining the economy, diverting goods from Venezuela over the border.

Many outside observers argue the government needed no help from smugglers in ruining the economy. Its own mismanagement and falling oil prices were accomplishing that just fine.

Either way, the government of Venezuela opened the border with Colombia because it had to do something.

“The immediate cause is massive unrest in Venezuela because of shortages of basic commodities,” said Bruce Bagley, professor of international studies at the University of Miami.

The average amount spent across the border was just $20, according to Peter Hakim, president emeritus of the Inter-American Dialogue.

“This suggests these are people without large incomes, without access to a lot of money that are really struggling to make ends meet,” he said. Each person was likely shopping for several others, and “$20 a person, even in Colombia in rural areas, does not buy a whole lot of food.”

But as Venezuelans streamed across the border, many have not found exactly what they’re looking for.

“People assumed that prices would be a lot cheaper in Colombia,” said Steve Ellner, professor of economic history at Universidad de Oriente in Anzoátegui, Venezuela.

Prices, it turns out, were just as high or higher than they were in Venezuela’s black market.

“Some people returned to Venezuela empty handed, others were somewhat disappointed,” he said.

“You’ve had a plummeting of the Bolivar so the ability of Venezuelans to purchase things is also quite devastated,” said Stephen Kaplan, assistant professor of political science at George Washington University.

The poorest Venezuelans now have more places to shop at prices they can’t afford.