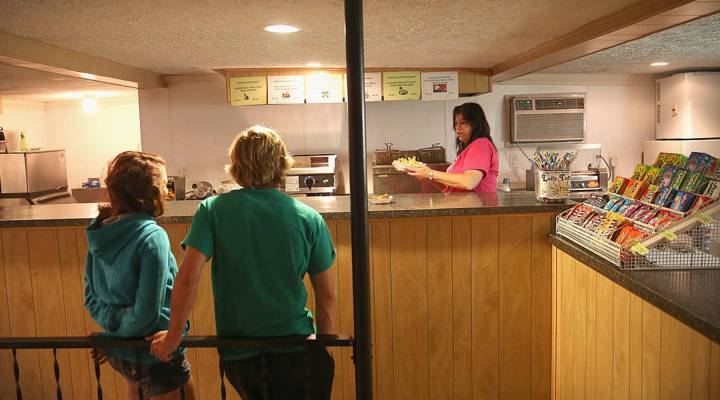 COPY
The concession stand at a drive-In theater on September 27, 2013 in Neligh, Nebraska.  Scott Olson/Getty Images

Hollywood hasn’t done a great job of pumping out the blockbusters this summer. And that’s saddled theaters with a big problem.

How do you keep revenues up, even as the number of people going to the movies is down.

Turns out part of that solution may involve a relatively small change.  Some theaters are experimenting with moving the candy out of the glass case and straight into the path of moviegoers.

If you are, or have been, the parent of a toddler, you can probably imagine why this works.  You’ve already invested a small fortune in movie tickets. You are headed for a blissful two hours in a dark theater. All you have to do is maneuver your kid past the racks of candy, now within the reach of his grabby, tiny,  hands.

“The minute the kid sees the candy, we would say the elasticity of demand of your son or daughter basically drops like crazy,” said Ricard Gil, a dad and a professor at Johns Hopkins Carey Business School.

That’s basically econ speak for the moment when a $5 box of Raisinets becomes a small price to avoid a Category 5 meltdown.

Simply moving the candy out front, also works on  adults too. “ Having them in front of you reminds you they are available, and you just do it,” said Gil. You never have to say, or feel the shame in saying: “I’ll have a Coke, some Junior Mints, and the Sour Patch Kids.”

Removing the barrier of the glass case can increase the volume of candy and other impulse items theaters sell by as much as 50 to 90-percent said cinema consultant Jack Oberleitner.

So why haven’t more theaters done it? “Like everything else,” said Oberleitner, “it requires money.” You need to shelves and signs and traffic patterns.

And theaters are already spending on other concession experiments. They’re adding sushi, vegetable plates, smoothies, alcohol, and those semi-magical-design-your-own-soda-machines.

Last quarter both chains reported a 10-percent-ish drop in box office revenue. At the same time, per person concession spending was at record highs.

But no amount of fancy food or candy-placement-manipulation if going to save the day.

If Hollywood can’t figure out how to make movies people want to see.