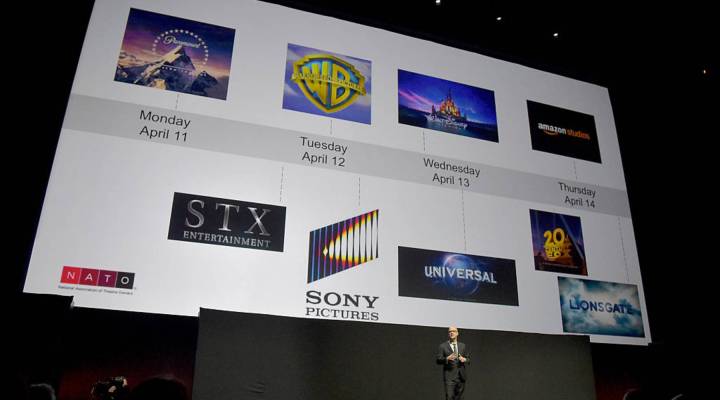 COPY
National Association of Theatre Owners President and CEO John Fithian speaks onstage during CinemaCon 2016 The State of the Industry: Past, Present and Future and STX Entertainment Presentation at The Colosseum at Caesars Palace during CinemaCon on April, 12, 2016 in Las Vegas, Nevada. Alberto E. Rodriguez/Getty Images for CinemaCon

National Association of Theatre Owners President and CEO John Fithian speaks onstage during CinemaCon 2016 The State of the Industry: Past, Present and Future and STX Entertainment Presentation at The Colosseum at Caesars Palace during CinemaCon on April, 12, 2016 in Las Vegas, Nevada. Alberto E. Rodriguez/Getty Images for CinemaCon
Listen Now

Whatever you might think of the current offerings playing down at the multiplex, these are good days to be in the movie business.

Global box office was more than $38 billion last year. But, and yeah, there’s always that but, the number of times we go to the movies has on average slipped in the last decade.

Getting people into actual theaters and out of their living rooms is one of the big conversations at this week’s CinemaCon, the annual gathering in Las Vegas of studios, theater owners, and all the folks who sell the candy and popcorn.

Everybody is talking about the Screening Room, which is this idea from Sean Parker, basically that would allow people at home to buy access to the big movies the same day they’re out in theaters. So [for] 50 bucks you [could] sit on the couch and watch “Batman v. Superman” instead of going out to the theater… This would mark this massive disruption to this industry, which is built around the idea of windows which is basically when a movie is out in theaters and then the window before we can watch it at home… Theater owners hate this idea, I mean, look they make so much money selling concessions. They make their money on the popcorn and soda that we buy. And they’re not interested in us having an option to skip out on going to their theaters.