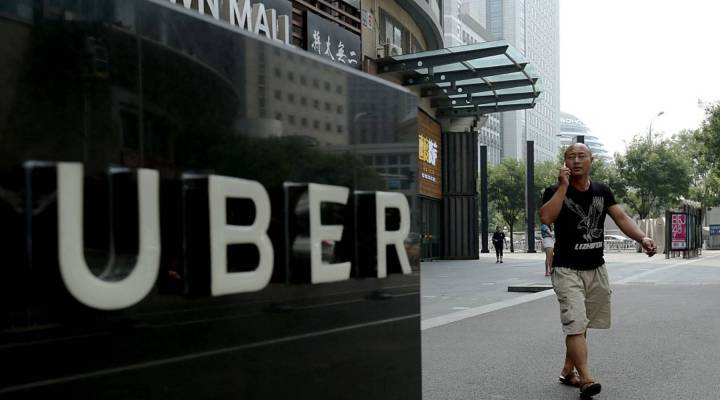 COPY
A man walks past an Uber station outside a shopping mall in Beijing on August 1, 2016. STR/AFP/Getty Images

A man walks past an Uber station outside a shopping mall in Beijing on August 1, 2016. STR/AFP/Getty Images
Listen Now

The ride-sharing company Uber said it’s selling its China business to Didi Chuxing, its rival there.

The deal will get Uber out of a money-losing situation and hands it a 20 percent stake in Didi, which now is reportedly valued at about $35 billion.

Uber entered China in 2013 and has been trying to scale up its business and thwart competitors by subsidizing drivers and riders. That cost it billions.

“I never thought Uber was going to work in China,” said Rob Atkinson, president of the Information Technology and Innovation Foundation.

“Every single internet company in the U.S. has a clone in China that’s copied their technology and dominated the market,” he said, “whether it’s in search or social network or shopping.”

Even Apple, a popular brand in China, recently ran into trouble. Chinese regulators ruled against Apple in a patent dispute with a small Chinese start-up. Apple is appealing.

Atkinson said this is all a departure from the China of the 80s and 90s, which welcomed more foreign direct investment, including from U.S. automakers. He said that attitude started to change about a decade ago and has gotten more pronounced under Chinese President Xi Jinping.

“It really began to change with Xi Jinping to be much more about indigenous innovation — in other words, Chinese companies,” Atkinson said.

Some of the preference for Chinese companies has to do with data security, according to Ian Bremmer, president and founder of Eurasia Group. Bremmer said the Chinese government doesn’t like American companies such as Uber holding the reins on Chinese consumers’ data.

“I think the Chinese government really feels like, for what will soon be the most important consumer market in the world, they would much rather control the data,” he said. “They would like to control the filters.”

As part of its deal with Didi Chuxing, Uber will hand over its data from UberChina to the Beijing-based company.