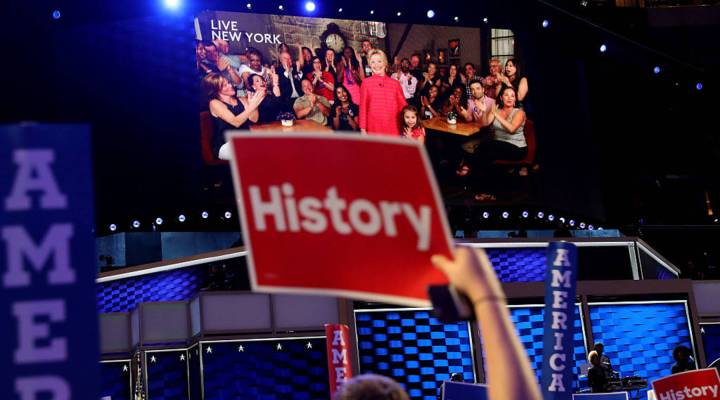 COPY
Delegates cheer as a screen displays Democratic presidential candidate Hillary Clinton delivering remarks to the crowd during the evening session on the second day of the Democratic National Convention at the Wells Fargo Center, July 26, 2016 in Philadelphia, Pennsylvania.  Joe Raedle/Getty Images

Delegates cheer as a screen displays Democratic presidential candidate Hillary Clinton delivering remarks to the crowd during the evening session on the second day of the Democratic National Convention at the Wells Fargo Center, July 26, 2016 in Philadelphia, Pennsylvania.  Joe Raedle/Getty Images
Listen Now

On Tuesday night, Hillary Clinton made history as the first woman to win a presidential nomination from a major U.S. political party. But Clinton hasn’t quite shattered the glass ceiling, with gender bias still a pervasive issue in the workplace, some say.

“It’s still not fully broken. First of all, you have to win to break it. But secondly, in other arenas of American life, this is still a very prevalent problem,” said Nancy Rothbard, a professor of management at the University of Pennsylvania.

Rothbard said that in the business world, there are fewer and fewer women the higher you rise in the field.

Rosabeth Moss Kanter, a Harvard Business School professor, said that the glass ceiling metaphor can’t quite be applied to this situation.

“It seems to me less a glass ceiling now than a sun roof, where we can pull it back, see the sunshine and feel hope,” she said.

Kanter argues that while a female head of state doesn’t mean the end of institutional gender bias as we know it, the accomplishment can be motivating for women.

So what can we do to dismantle discrimination in the workplace?

“Unfortunately, we don’t have great solutions,” Rothbard said. “One of the thoughts in recent years has been that we really need to encourage sponsorship of women. And sponsors are people who, additionally, will advocate for you. Who are there to say, ‘You know, this person is going to be a star. And we really need to develop this person.”

Rothbard said she’s had mentors and sponsors — both men and women — throughout her career. She happened to make history herself on July 1, becoming the first woman chair of the management department at Wharton.

Click the above audio player to hear our full interview with Nancy Rothbard.