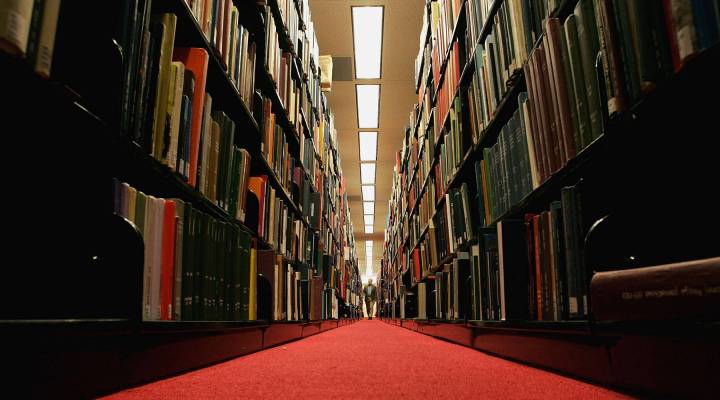 You’ve probably got some music on your phone, or you might stream it through apps like Spotify or Pandora. Every time you click on one of those songs, the artist gets a little bit of money. And yet, it’s called your music “library.” But when you check out a book from the library, it’s free. Well, it’s sort of free.

Marco Marin was looking through the online catalog at a kiosk in the lobby of the Los Angeles County Central Public Library. He said he goes there to check out books at least once a week. He likes apocalyptic tales.

“Your basic zombie story,” he said. “Kind of the world ending through zombies.”

Marco said he likes reading physical, paper books, but he’s also downloaded some ebooks. He said he appreciates being able to use the library for free, but he has questions about the business model, too.

“I actually did think about that the other day,” he said. “I never got to the bottom of it, but I have always wondered how is it that works. I mean, they get published, obviously they get money. I’m assuming when it comes down to libraries that they would donate them.”

Generally, that’s not the case. The model is pretty simple. The libraries buy the books from publishers. And depending on the size of the library and the popularity of the book, a library might buy a particular title by the case.

Julie Todaro, president of the American Library Association, said the funding for most acquisition budgets is provided through taxes.

“Items are purchased for use by all based on the model that people have prepaid for this,” she said. “In fact, I always used to laugh and say, ‘You know, yes libraries are free, but they really are prepaid.’ Odds are you’ve paid for it in your taxes in some way.”

Tax payers have paid for the library books, but how much authors make from that sale depends on their contracts.

“It’s the relationship between an author and his editor or his publisher,” she said. “That’s where the author’s money comes from.”

Authors get different royalty prices for each type of sale.

Mark Shaw’s written more than 20 books and said he gets a certain amount of money if his publisher sells his book to a retail store and a different amount if it’s sold to a library.

“Sure, there are some authors who are going to be a little bit disturbed by the royalty amount or whatever, but there’s a great part of the population that can’t afford books,” he said. “And so they can go to the library, they can check out a book, it doesn’t cost them anything.”

Shaw has a particular affinity for the library system. In fact, he’s been married to a librarian for 10 years.

But that staple of society is changing. The Los Angeles County Public Library has a lot of physical books, but it’s shifting a lot of its book budget to more of the hybrid model with ebooks and audio.“I know I sound like a cheerleader for libraries, and it’s not just because my wife is a librarian. But I really believe that that’s one of the staples of our society, is libraries.”

So, another question to consider is how authors get compensated for every time people click on a title to check it out from the library and read it on their tablet or phone.