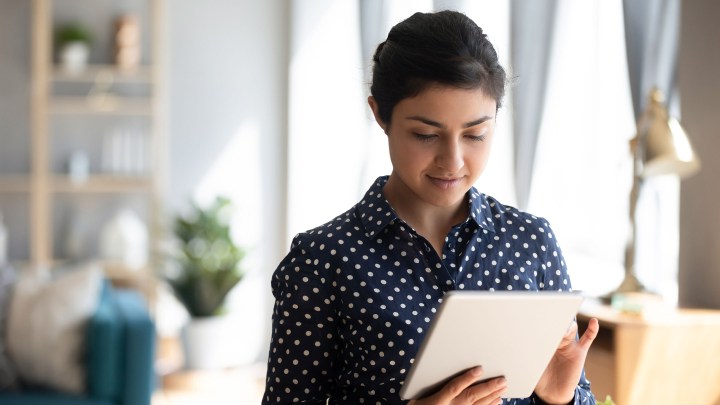 COPY
Since the beginning of the pandemic, library checkouts of electronic books have shot up by more than 50%. And libraries expect the demand to last. fizkes via Getty Images
COVID-19

Since the beginning of the pandemic, library checkouts of electronic books have shot up by more than 50%. And libraries expect the demand to last. fizkes via Getty Images
Listen Now

Caley Burke has always been a big reader. An aerospace engineer for NASA, she reads science, science fiction, literary fiction.

“I also do a lot of romance,” she said. “And you can go through those very quickly, so that’s where going to the library does save a lot of money.”

Since COVID-19 hit, going to the library has usually meant going online. Since March she’s checked out 97 e-books. Burke said she loves the freedom of it.

“It’s like a different version of scrolling through your Netflix or Hulu and being like, ‘I have all this selection. What books do I want to pick?’ ” she said.

Since the beginning of the pandemic, library checkouts of electronic books have shot up by more than 50%. And libraries expect the demand for e-books to last. Hearing that may delight librarians. Publishers? Probably not.

Most publishers’ licensing terms limit the number of checkouts and make libraries re-buy the books every year or two, he said. But during COVID, some publishers have eased up on e-book terms and pricing. Rosenblatt said that makes sense, given the challenges confronting another category of customers, physical bookstores.

Despite all the digital borrowing this year, publishers’ e-book sales haven’t suffered. The Association of American Publishers reports that e-book sales were up more than 16% from the previous year in the first 10 months of 2020.

Still, Rosenblatt said, publishers could change their library pricing again after the pandemic.

“The cold reality is that libraries have to start thinking about this in business terms if they’re going to come to some sort of mutual accommodation with publishers,” he said.

But librarians say they have business problems of their own.

Jennifer Rothschild selects and buys books for Arlington Public Library in Virginia. She said the pandemic is wreaking havoc on local government budgets.

“So going into next year, libraries are facing a huge funding crisis,” she said.

If they can’t afford enough e-books to meet the growing demand, Rothschild said, “then people are like, ‘Oh, my library doesn’t have this because they don’t know what’s popular and they’re out of touch.’ “

She said that begins a cycle: People use the library less, advocate for it less, and that, in turn, can affect its funding.